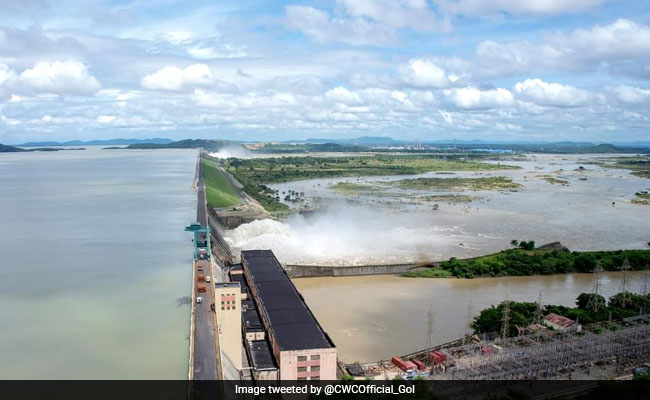 Forty sluice gates of the Hirakud Dam in Odisha, were opened on Friday to discharge excess water.

Fear of flood looms large in the Mahanadi river system in Odisha following heavy rainfall in its upper catchment areas in Chhatisgarh and a rise in the water level of Hirakud Dam, a senior official said.

Five more people lost their lives in rain-related incidents in the state on Friday, raising the deaths to nine, while 4,15,817 people in 10 districts are affected, Special Relief Commissioner (SRC), PK Jena, said.

Forty of the 64 sluice gates of the Hirakud Dam, built across the Mahanadi near Sambalpur in Odisha, were opened by the authorities on Friday to discharge excess water.

The flood in the Mahanadi river system is likely to affect coastal districts such as Puri, Khurda, Cuttack, Jagatsinghpur and Nayagarh, another official said.

Many other rivers are in spate submerging low-lying areas and snapping road connectivity.

Over 3.83 lakh people in 552 villages are marooned, while 2,757 houses have been damaged, he said adding that over 18,534 people have been evacuated from affected areas and shifted to 106 shelter centres.

After heavy rainfall in the upper catchment areas of the Mahanadi in neighbouring Chhattisgarh, over 6.9 lakh cusec water is now entering the Hirakud reservoir while 4.11 lakh cusec is being discharged through 40 sluice gates of the dam, the Mr Jena said.

The water level at Hirakud Dam stands at 625.58 feet as against the full reservoir level of 630 feet, he said.

Excess water is being discharged from the reservoir due to the huge inflow, Mr Jena said.

As the inflow at Hirakud Dam is likely to increase up to 8 lakh cusec shortly, the authorities are expected to raise the volume of discharge to over 6 lakh cusec from the reservoir, Mr Jena said.

When the water flow is above 10 lakh cusec, it is categorised as medium to major flood, chief engineer of water resources department, Jyotirmaya Rath said. It will take more than 24 hours for the water from Hirakud Dam to reach Munduli to increase the flow from 10 to 10.5 lakh cusec there, he said.

Mr Rath said that heavy rain continued to lash upper catchment of the Mahanadi where about 200 mm rainfall was recorded till Friday morning.

With the discharge of 6 lakh cusec of water from the Hirakud Dam soon, water from rivers such as the Tel, Suktel and the Jira will be flowing into the Mahanadi, Rath said.

Of the fresh casualties, the SRC said that one death each was reported from Bargarh, Jajpur, Balasore, Nuapada and Bhadrak districts.

While two persons died in incidents of wall collapse, three others drowned in canals or rivers.

The Brahmani, Baitarani, Subarnarekha and the Jalaka are flowing above the danger level at different places but the water level of some of these rivers are likely to recede, the SRC said.

Arrangements have been made to evacuate people to safer places in Bhadrak, Balasore and Jajpur, Mr Jena said.

The intensity of rainfall has subsided considerably in the state since Thursday.

Formation of a low pressure area over the Bay of Bengal had triggered heavy downpour in Odisha since Monday.

This was the fifth low-pressure area formed over the Bay of Bengal this month causing heavy rainfall in the state.