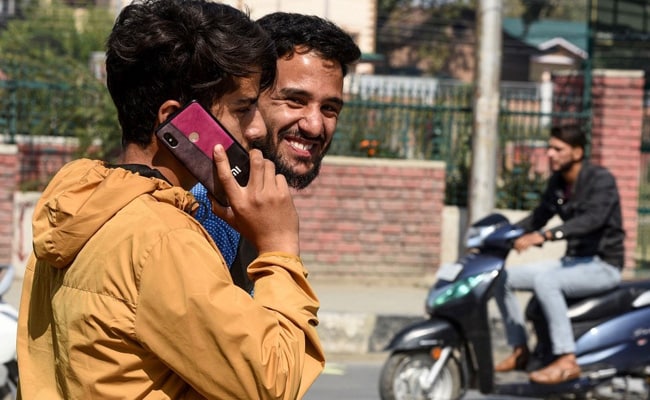 2G internet facility on mobile phones were restored in Jammu and Kashmir on January 25. (File)

High-speed mobile internet services were restored as a trial in two districts of Jammu and Kashmir on Sunday night, more than a year after it was suspended. The Jammu and Kashmir administration said 4G services will resume in Ganderbal and Udhampur districts – one each in Kashmir and Jammu divisions effective from 9 pm Sunday and will remain in force till September 8, unless modified earlier.

The move comes days after the centre informed the Supreme Court that a special committee looking into the matter was considering allowing the facility on a trial basis in two of the 20 districts of the union territory.

“The high-speed mobile data services in the districts of Ganderbal (Kashmir) and Udhampur (Jammu division) shall be restored forthwith, on trial basis, while in rest of the districts, the internet speed shall continue to be restricted to 2G only,” an order issued by the Jammu and Kashmir Home Department read.

The order said that high-speed internet will be provided to post-paid subscribers while pre-paid customers would be able to enjoy the benefit of the services only after completing the verification process.

Internet services were snapped in Jammu and Kashmir hours before the centre scrapped its special status and split the erstwhile state into union territories — Ladakh, and Jammu and Kashmir – on August 5 last year.

2G internet facility on mobile phones was restored on January 25. Earlier this month, the Supreme Court had asked the Jammu and Kashmir administration to explore the possibility of restoring 4G services in certain areas.

The top court was hearing a plea by an NGO seeking initiation of contempt proceedings against the Union Home Secretary and the Chief Secretary of JK for their alleged “wilful disobedience” in complying with the court’s May 11 order which had directed for constituting a committee that would go into the possibilities of restoring high-speed Internet in the union territory.

The Jammu and Kashmir administration had sought time to take instructions on the restoration of high-speed data services, saying a new Lt Governor has been appointed in the Union Territory.

However, the top court had told the administration that with the change of Lieutenant Governor, nothing changes.