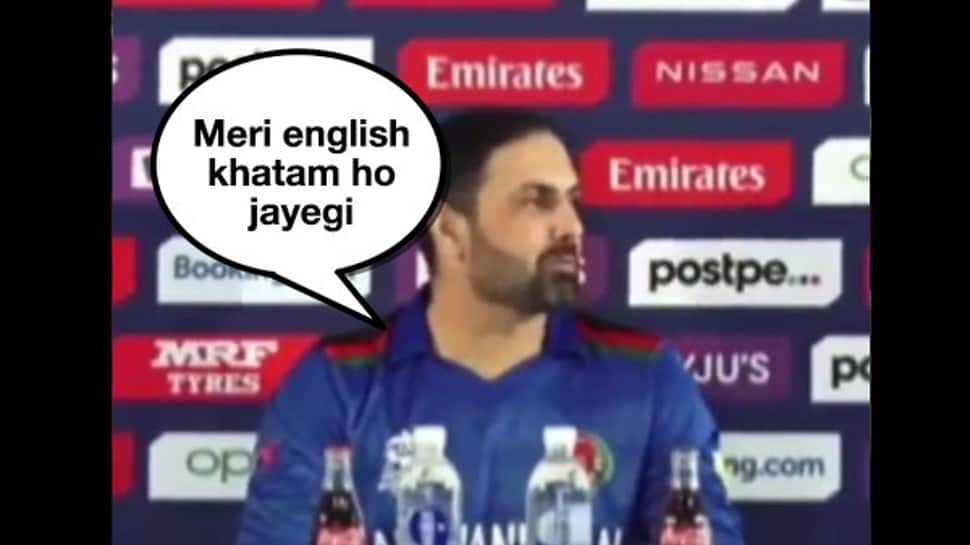 Afghanistan captain Mohammad Nabi hilariously trolled himself during a press conference after his team’s 130-run win against Scotland in the T20 World Cup 2021 on Monday (October 26).

Notably, many cricketers across the globe do not really enjoy talking to the media and aren’t comfortable speaking in English. Nabi is one of them and he is honest about it as ahead of the post-match press conference on Monday, the all-rounder hilariously said, “Sabse mushkil kaam hai bhai yeh (This is the most difficult job to do)” while he was settling down.

The sequence of events that followed afterward just gave a glimpse of what happens behind the scenes before any media interaction. Nabi asked, “Kitne questions hain? (How many questions are there)” as he presumably looked hoping for the conference to end as early as possible.

The Afghanistan skipper then went on to troll himself few moments later as he stated, “5 minutes mei meri English khatam ho jayegi bhai (My English will be over in 5 minutes),” leaving all the viewers of the video in splits.

Earlier, Nabi said that the fans back home would really be happy if the side does well in the ongoing ICC Men’s T20 World Cup game.

“The fans are really waiting for that camp because the only happiness in Afghanistan is cricket. If you’re willing to do well in the tournament and we win the games, the fans are really happy and there will be a lot of smiles on faces and insha’Allah everything will be changed of this work if we do well in the tournament,” said Nabi ahead of Scotland clash on Sunday.

The political unrest back in Afghanistan following the Taliban takeover hampered the preparations of the cricket team, however Nabi said that they are raring to go for the competition.

“Everyone knows that back home in Afghanistan there’s a lot happening and everything from the last few months. But as a cricket point of view everybody is ready for that World Cup and we prepared well for this World Cup,” said Nabi.

“There is a little issues when we arrived to Dubai about with those issues. But these last two warm-up games and practise session will well prepare for the team and prepare well for the upcoming games for tomorrow games as well,” he added.