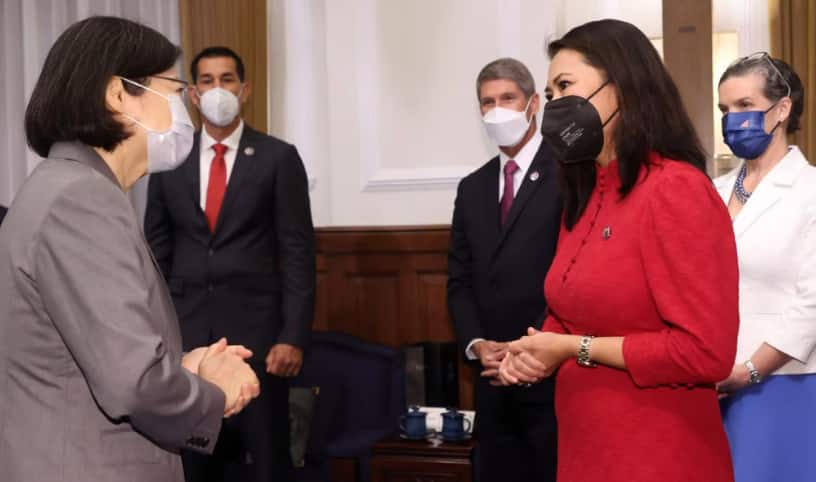 Taipei: Another US Congressional delegation is visiting Taiwan as tensions with China remain high over its claims to the self-governed island. A steady stream of US visitors has come to meet with Taiwanese officials since US House Speaker Nancy Pelosi visited in early August. China in response has stepped up its military harassment, sending warships, warplanes and even drones towards the island on a daily basis. Led by Florida Democrat Stephanie Murphy, the delegation met on Thursday morning with Taiwanese President Tsai Ing-wen, whose administration China has relentlessly sought to deprive of diplomatic recognition and participation in international organizations.


Referring to China’s military threats, Tsai said the delegation’s visit “conveys rock solid support for Taiwan from the U.S. Congress,” “Taiwan will not bow to pressure or coercion,” Tsai said. “We will defend our democratic institutions and way of life. Taiwan will not back down.”


Murphy replied that Congress “should advocate for greater Taiwanese participation in international organizations,” adding “Taiwan has shown itself to be a responsible member of the international community, especially in public health issues, and it deserves to participate in international fora when appropriate.”


Murphy is among lawmakers who introduced a bill that would allow the U.S. To lend weapons to support Taiwan, similar to a bill that had passed to lend weapons to Ukraine. Last week, the Biden administration approved a $1 billion arms sale to Taiwan. Murphy also said deepening economic relations with Taiwan was “one of the most important things Congress can do right now,” particularly by pushing for a “high-quality free trade agreement” between the sides. Negotiations are underway between the Biden and Tsai administrations on a trade pact.

Pelosi was the highest-level member of the US government to visit Taiwan in 25 years. China responded by holding extended military exercises that included firing missiles over the island and sending ships across the midline of the Taiwan Strait, which was long a buffer between the two sides. Some of the missiles landed in Japan’s exclusive economic zone.


China sees high-level foreign visits to the island as interference in its affairs and de facto recognition of Taiwanese sovereignty. China’s recent military drills were seen by some as a rehearsal of future military action against the island, which U.S. Military leaders say could come within the next few years.

Responding Wednesday to the latest U.S. Arms sale, Foreign Ministry spokesperson Mao Ning said China’s opposition to defense cooperation between Washington and Taipei is ?consistent and clear.” “We will resolutely respond to acts that undermine China’s sovereignty and security and interfere in our internal affairs,” Mao told reporters at a daily briefing, without giving details.


Following Pelosi’s trip, a US Senator and another congressional delegation visited Taiwan, as well as public officials from Japan and Palau. Further, both Arizona and Indiana’s governors made visits with a focus on semiconductors, the industry which Taiwan’s companies dominate.