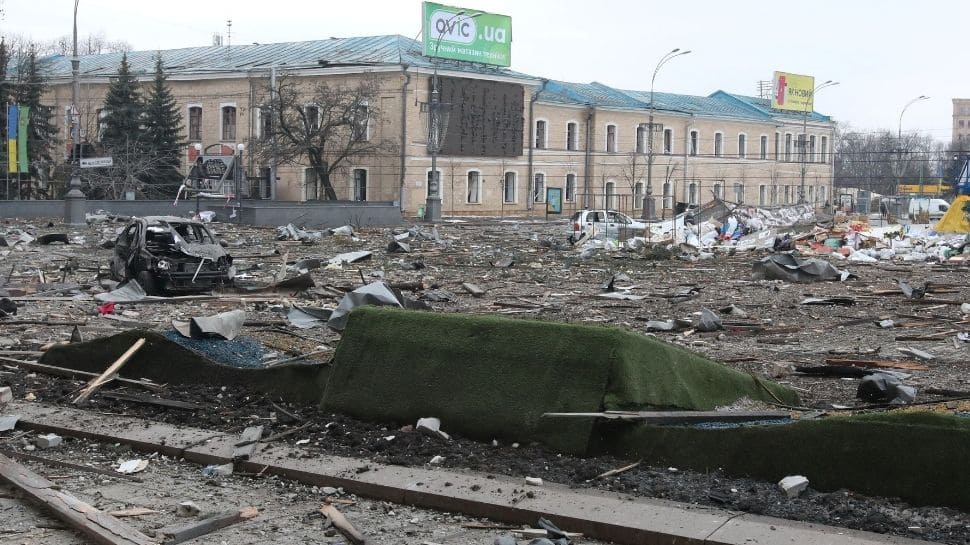 Kyiv: As Ukraine-Russia war intensified, Tuesday (March 1, 2022) brought itself a very sad development for India. A student of medicine, originally from Karnataka, was killed in the shelling in Kharkiv. PM Narendra Modi attended another high-level meeting to take stock of the situation. “PM Modi expressed deep anguish over the loss of life of Indian citizen in Kharkiv,” said Foreign Secretary Harsh Vardhan Shringla after meeting on Ukraine crisis.

Shringla said, “We had an estimated 20,000 Indian students in Ukraine at the time that we issued our first advisory. From that number approximately 12,000 have since left Ukraine, which is 60% of the total number of our citizens in Ukraine. Of the remaining 40%, roughly half remain in the conflict zone in Kharkiv, Sumy area and the other half have either reached the western borders of Ukraine or are heading towards the western part of Ukraine – they are generally out of conflict areas.”

We had an estimated 20,000 Indian students in Ukraine at the time that we issued our first advisory. From that number approximately 12,000 have since left Ukraine, which is 60% of the total number of our citizens in Ukraine: Foreign Secretary Harsh Vardhan Shringla (1/2) pic.twitter.com/mUzuHPiOFT

Shringla also said that all of “our nationals have left Kyiv. The information with us is that we have no more nationals left in Kyiv, nobody has contacted us from Kyiv since. All our inquiries reveal that each and every one of our nationals have come out of Kyiv.”

Shringla said that over the next three days, 26 flights have been scheduled to bring back Indian citizens. “Apart from Bucharest and Budapest, airports in Poland and Slovak Republic will also be used to operate evacuation flights,” Shringla said. He added, “A C-17 IAF aircraft is expected to fly out to Romania at 4 AM on Wednesday to bring back Indians.” The Foreign Secretary also said that PM Modi received a call from President of France Emmanuel Macron and the PM also spoke to President of Poland. “Earlier this afternoon I separately called in the Ambassadors of Russia and Ukraine. I reiterated strongly our demand for urgent safe passage for all Indian nationals who are still in Kharkiv and other cities in the conflict area,” said Shringla.