This may be the last hurrah for the Intel Core processor powered Apple iMac line-up. Or it may not be. We don’t know. But what we know for sure is that this is a pretty big upgrade all things considered and will hold you in good stead for many years to come. Apple and Intel’s partnership doesn’t matter one bit. We are often asked if this is a good time to buy a new Mac computing device, considering the upcoming shift to Apple Silicon starting later this year—and it’ll be a two-year project. It does not at all mean that the iMac may be the first to make the switch from Intel Core processors to the Apple Silicon. For all we know, it may not even be for the entirety of next year. Therefore, the answer is a resounding yes. If you need a computing device now to get work done, you really can’t hang around for another 6 months, 12 months or 24 months. Can you? Either way, this powerful Apple iMac 27-inch, the refreshed and updated 2020 edition, will continue to deliver a fantastic computing experience long into the future.

Right now, there are three standard options of the Apple iMac 27-inch that you can buy, with further customizations available if you head to an Apple reseller and want to bump up some specs for your iMac order. The entry spec variant is powered by an Intel Core i5 processor with 8GB RAM and a 256GB SSD and is priced at Rs 1,69,900. The mid-spec option is also powered by an Intel Core i5 processor but with a higher 3.3GHz clock speed instead of the 3.1GHz clock speed of the entry-spec variant, with 5GB RAM and 512GB SSD for Rs 1,89,900. The top spec variant has the Intel Core i7 option with 8GB RAM and a 512GB SSD—and this costs Rs 2,19,900. All processor options are the 10th generation Intel Core family. The customization options include bumping up to the Intel Core i9 processor, up to 12GB of RAM and up to 8TB SSD. In fact, Apple has made it quite simple to upgrade the RAM on this Apple iMac 27-inch iteration, which means even if you don’t get a RAM upgrade now, you can do so later at some point.

As for the first look, this Apple iMac 27-inch looks very much like the one last year. And the one before that. That cannot at all be a bad thing, because this still sets the design benchmark that most Windows 10 based AIOs, or all-in-ones, try to emulate. And it hasn’t aged as a design. The familiarity works too, and chances are, so will most of your accessories and peripherals. All the I/O ports sit behind the display—and there are a lot of them in case of the Apple iMac 27-inch. There are 4 USB ports, two Thunderbolt 3 ports that we also know as USB-C, a SD card slot, a 3.5mm headphone jack and a Gigabit Ethernet port. If you have an even faster network connectivity requirement, you can upgrade this 1Gbps port to a 10Gbps Ethernet port as well. The Thunderbolt ports support up to 40Gbps of data speeds and can also be used for connecting an external display (up to 6K) and the USB 3.1 ports can go up to 10Gbps of data transfer speeds.

You might point to the bezels around the screen at this point. Yes, I admit they are thicker than most modern displays that may otherwise be vying for space on your desk, and thinner bezels would be the way to go. But it is perhaps important to realize that when you are looking at 27-inch display real estate, it can itself be so immersive that the bezels won’t really be noticed at all. And it will eventually happen too, as part of the regular upgrade cycle. But the bezels aren’t taking anything away from the otherwise pristine user experience.

Display: As Immersive As It Gets, With True Tone Now

As far as the spec sheet goes, this is a 27-inch Retina 5K display with the 5120 x 2880 resolution. Add to that the 500 nits of rated brightness, and what you have is a display that remains unmatched as far as most desktop rivals in the Windows 10 ecosystem are concerned. The iMac displays have always set the benchmark for accuracy and this year’s Apple iMac 27-inch doesn’t upset the applecart. Photo editing, video editing and any artwork will look through to you as close as possible to how you’d want it.

This time around, the Apple iMac 27-inch gets the True Tone feature too. We may have never realized this, but the iMac didn’t have the True Tone ambient display capabilities till now—something that all MacBook options have had for a while now. The difference shows as you turn True Tone on or off, and it really does make a world of difference as far as the eye comfort is concerned. True Tone is basically understanding the illumination and the temperature of the ambient lighting and altering the colours and the temperature on the display to closely match that. So that you do not end up sitting in warm light looking at a display that best resembles a cold colour temperature. It will make a lot of difference as you sit at your workstation for hours, toiling away.

There is also the Nano-Texture Glass coating that Apple is offering as an optional accessory. We have not tested that out yet, so hard to comment on what it does to reduce reflections and glare. For my use case scenario which involves natural light streaming in behind the Apple iMac 27-inch as well as wall lights and study lamps, reflections were never really a big problem. I suspect that option will be checked off by the pros who need the Apple iMac 27-inch for some serious photo or video editing. Performance: When Storage Gives You A Big Speed Boost

Of the three variants that you can choose from, the Apple iMac 27-inch is available with the 10th generation Intel Core i5 processor in two different states of tune as well as the Intel Core i7 processor. The Intel Core i9 can be had as a customization option. There is 8GB of RAM as default, but you can bump this up to 128GB RAM. And Apple had made it really easy to upgrade RAM, via the accessible hatch on the back of the Apple iMac 27-inch. The Core i7 version gets the Radeon Pro 5500 XT with 8GB of GDDR6 memory

Yet, the performance boost is perhaps delivered the most by the switch to SSD storage. It is genuinely a significant upgrade from the Fusion Drive storage that was common on iMac options till now. Read and write speed are significantly faster than before, and everything just feels snappier compared to an iMac with a Fusion Drive. That is one of the reasons why I never really made the switch from the screaming fast SSDs on the MacBook Pro line to the iMacs with Fusion Drives—because the performance dip was too profound, comparatively. Now, it is even stevens.

Everything is just faster than before, because the innards are now faster through the chain. The 10th generation processors offer a performance boost over the 8th generation Intel Core processors, the new 16GB GDDR6 memory is as much as 6X faster than the 8GB GDDR6 RAM in comparison and the SSD storage boasts of peak read and write speeds of 3.4GB per second. Purely as an observation, switching from a MacBook Pro running an Intel Core i9 processor with 16GB RAM and a blazing fast SSD too, there were absolutely no usage scenarios in which one could say the Apple iMac 27-inch was visibly slower, even marginally. The performance, for most of my workflow, as near as makes no difference, feels at par.

T2 Security Chip: The Magic Chip Does A Lot Of Things

Yet again, it is the T2 Security Chip that continues to do magic. First and foremost, its job is to keep the data on the storage secure. This has a Secure Enclave coprocessor that provides secure boot and storage encryption. But much beyond that, the Apple T2 Security Chip enables the “Hey Siri” detection for the virtual assistant, the image processing from the new 1080p FaceTime camera, the audio processing for the speaker system including the bass response and also speeds up transcoding of HEVC video. 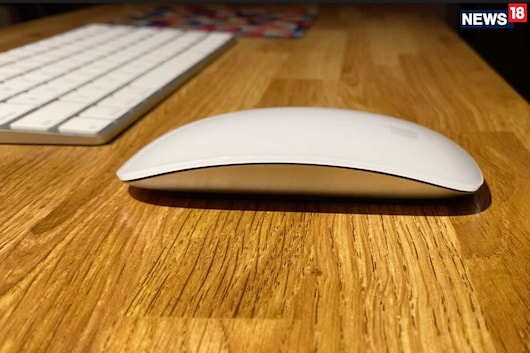 Where Is My Touch ID Sensor?

What is perhaps missing the most from the new Apple iMac 27-inch is the Touch ID fingerprint sensor, something that is now standard across the MacBook line. For me, as a habit, the finger would go towards the top right of the keyboard when it was time to either authenticate a web login or resume a session by unlocking macOS. Alas, that is still not an option on the Apple iMac 27-inch. Secondly, the iMac also does not have face detection—two features that we really hope Apple adds in the next refresh.

New FaceTime Camera: It Is All about How You Look

The first time any Mac computing device is getting a new FaceTime camera after many years is this, the Apple iMac 27-inch. The new 1080p resolution camera is a significant improvement over the 720p FaceTime camera thus far. Not just because there are more megapixels at play, it is also because it is a larger sensor than before. Then there is also the small matter of the updated image processing at play which can detect faces to keep them in focus, can do tone mapping and also exposure control in case there is a changing light source around you. You will also notice during video calls that your background will now be a lot more detailed and crisper than before—which means you will need to clean up that mess in your room. A lot of these improvements come with the T2 Security Chip, and all video conferencing apps will be able to take advantage of these improvements. Your FaceTime, Microsoft Teams, Zoom and Google Meet calls will now see you look a lot better to fellow participants.

The Last Word: The Apple iMac 27-inch Delivers Exactly What You Would Want

The thing with the Apple iMac 27-inch, the 2020 refresh, is that it is everything you would have expected from an Apple iMac this year. More power, more storage, better FaceTime camera and most definitely the True Tone feature that I really don’t think I can now do without. Yet, it also misses out on stuff, none of which would be a dealbreaker—no Touch ID and no slimming of the bezels around the screen. The SSD update, at least for me, makes the biggest difference as far as performance is concerned. And to someone buying the Apple iMac 27-inch, that is all that should matter—the performance. And on that front, it again has no rivals.