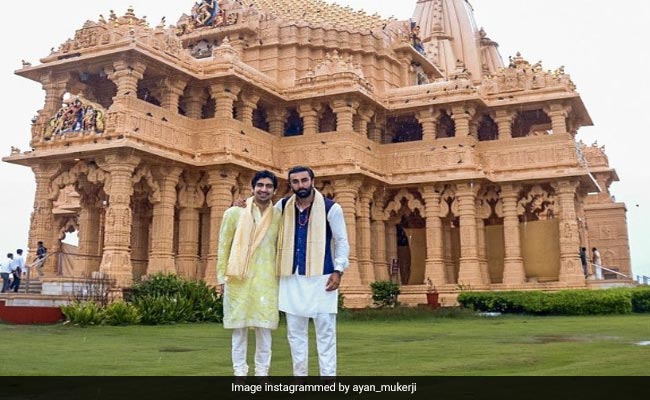 Ayan Mukerji recently completed his third Jyotirling visit this year. On Thursday, the Brahmastra filmmaker shared a picture of himself with actor Ranbir Kapoor from his visit to Somnath Temple on his Instagram. His caption read, “Somnath Temple. My Third Jyotirling Visit this year. Had told myself I would come here after Brahmāstra releases, and am so happy and energised that we made it here!” His caption was accompanied by the hashtag Gratitude. In the picture, both Ayan and Ranbir can be seen wearing ethnic ensembles and posing for the camera.

Many of his fans commented on Ayan’s post. One of them wrote, “I must say the movie was too good, the Storyline is perfect. Don’t listen to Defaming rumours. Just keep improving.” While the other Instagram user wrote, “Bhaiya movie ke dailogues writer ko change kar dena next movie me.”

Just a week ago, Ayan shared a post from his visit to the Mahakaleshwar Temple. The post was three days before his film’s release. Sharing a picture of himself offering prayers to lord Shiva, the filmmaker wrote, “3 DAYS AWAY… Feel very happy and energised to have visited Mahakaleshwar Temple today… Got the most beautiful darshan… Wanted to make this visit to close the film-making journey on Brahmāstra, and to get all the positive energy and blessings for our Release.”

In the past, Ayan Mukerji has shared several posts on his Instagram handle, where he can be seen visiting many temples.

Check out his posts here: