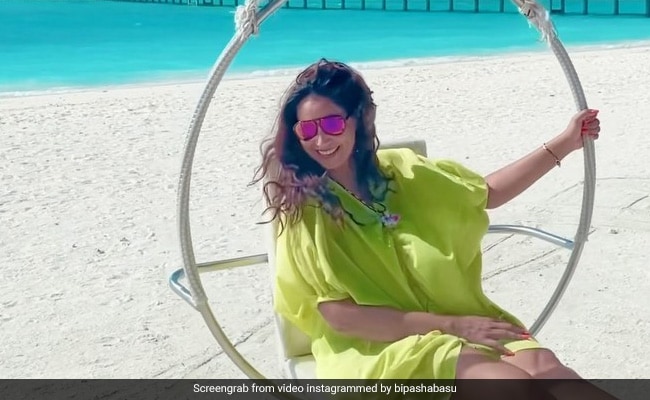 Bipasha Basu in a still from the video. (Image courtesy: bipashabasu)

Bipasha Basu is in Mumbai but she is clearly dreaming of the Maldives. The actress shared an Instagram Reel, which is a throwback from the island nation. In the video, Bipasha can be seen making the most of her me time in Maldives. The actress can be seen dressed in a neon green kaftan. She added Harrdy Sandhu’s track Bijlee Bijlee along with it. She captioned the post: “My Favourite Blues.” She added the hashtags #trendingsongs, #trendingreels, #sunsandsea, #vacationgoals and #throwbacl along with it.

Bipasha Basu loves to share throwbacks on social media. She shared a throwback video from her wedding on her anniversary and she wrote: “You will forever be my always Karan Singh Grover. Red and gold was my choice. My dream was a stunningly crafted Sabyasachi bridal outfit with traditional motifs. Dream came true.”

Bipasha Basu met Karan Singh Grover during the shooting of the 2015 film Alone. The couple got married on April 2016 as per Bengali traditions. They later hosted a reception for their industry friends, which was attended by several Bollywood stars. The couple co-starred in the web-series Dangerous.

Bipasha Basu was a presenter on the TV show Darr Sabko Lagta Hai. The actress is best-known for her roles in films such as Dhoom 2, Dum Maaro Dum, Race, Omkara, Bachna Ae Haseeno and Raaz, among others.