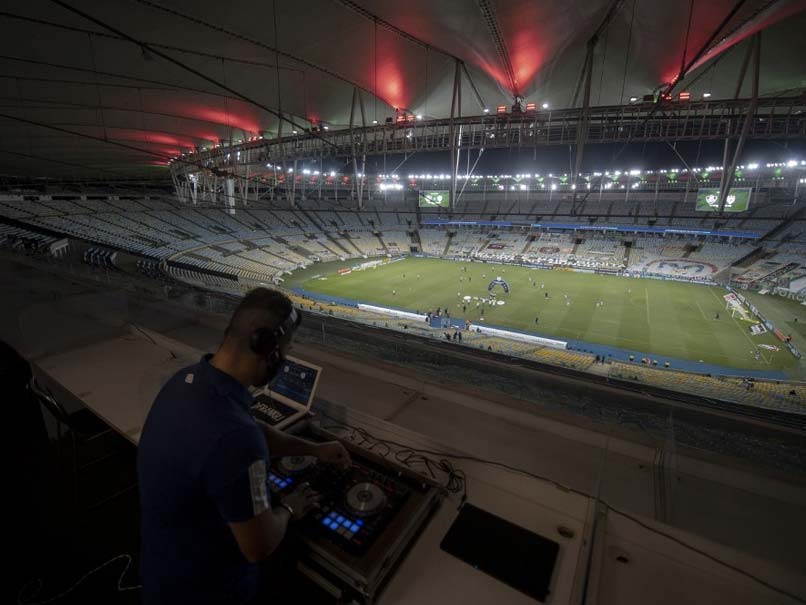 Brazil’s top football clubs are turning to DJs to pump up the volume to support their players and help mask the eerie silence of coronavirus-era empty stadiums. DJ Franklin Scheleger sets the mood for Rio de Janeiro club Fluminense, who play their home games at the legendary Maracana, where in the absence of fans the vast stands would otherwise echo with the shouts of players or coaches. “The challenge is to be connected with the action,” says Scheleger as he works a sound deck high up the stands.

Scheleger, 29, used to host events organized by the club, but now he is tasked with making up for the absence of Fluminense’s famously noisy fans by blasting out their recorded cheers and chants at home games.

“I am very honored to represent the supporters of my favorite team, it’s an incredible feeling. Indescribable!” he says.

Deprived of their supporters, Brazilian clubs are relying on DJs not so much to recreate the incandescent atmosphere of the games — that would be impossible — but to help their team forget the closed-door nature of football after authorities banned crowds to prevent the spread of the coronavirus.

Marcos Costi, 38, mixes the sound for Sao Paulo-based Palmeiras, the most successful club in Brazilian football.

“When Palmeiras is on the attack, I turn up the sound. During the penalty shootout in the Sao Paulo championship final against Corinthians, when our opponents were about to take their kicks, I cranked up the volume to try to disturb them somehow,” he said.

It’s hard to say whether Costi’s ploy really had an effect, but Palmeiras beat their arch-rivals and won the 365th edition of the Paulista derby last month, 4-3 on penalties.

Both DJs agree that being fans of their clubs makes it easier for them when it comes to representing the mood of the crowd.

“I’ve been to the Maracana before, so I have experience of what it’s like to be in the stands, and that makes it pretty easy,” says Scheleger.

“The fans have a specific chant for different parts of the game. When they celebrate, there is a specific chant. When we concede a goal, there’s another one so that the team doesn’t collapse.”

Costi explains that he works with a library of 15 different types of crowd noises recorded by the club’s TV channel in pre-Covid times.

“I’ve always been a fan of Palmeiras, and I know what the fans would sing or how they would behave in any given situation. Of course, that’s my take, but I think it’s close to reality,” he said.

He admits he has pumped up the volume a little too high at times.

“Once, the club itself asked me to turn down the sound a little because the players couldn’t hear the instructions from the coach!”

His counterpart from Fluminense, Scheleger, says he’s excited to effectively “be the voice of thousands of people.”

But the pandemic nonetheless hangs heavy over football in Brazil, one of the world’s worst-affected countries.

“It’s a bit confusing. I feel privileged to be the only fan that can be in the stadium, but at the same time it’s sad, because a stadium without supporters is one of the saddest things that can exist,” Costi said.

“There’s a huge void. A mixture of joy to be there and sadness.”