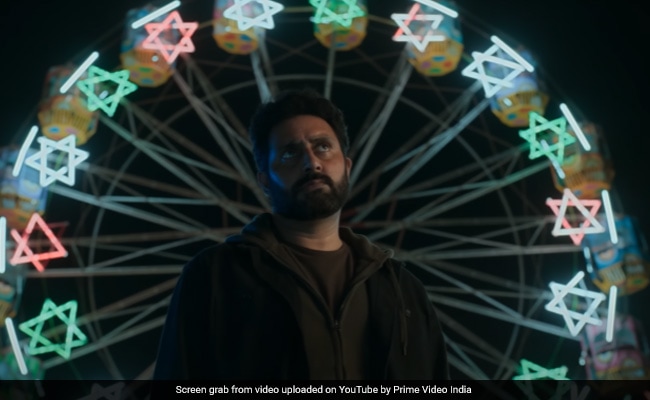 Three years have passed since his last strike. The psychotic killer is now in an asylum undergoing treatment. But soon enough Avinash Sabharwal (Abhishek Bachchan) is on the run again. Along the way, the psychiatrist-turned-fugitive strikes up a partnership with a man struggling to live down severe childhood trauma.

As the crazed vigilante in Avinash’s head goes about completing what he began – the brutal elimination of modern-day embodiments of the damaging emotions that Ravan’s ten heads represented. He is aided in his murderous mission by Victor (Naveen Kasturia), who, like Avinash, has scores to settle with the world.

Season 2 plays out in the manner of a routine revenge drama. The befuddling psycho-babble of Season 1 gives way to a more straightforward good-versus-evil confrontation that pans out in the context of the protagonist’s moral duality as well as in the real world where law enforcers are out to nab the deviant.

The protagonist’s inner turmoil is mirrored by the bitter tussle that his bete noire, Kabir Sawant (Amit Sadh), has to engage in with his bosses in the Delhi police crime branch hierarchy. It is an all-male set-up although outside the department the principal investigator receives occasional assistance from two women – Shirley D’Souza (Saiyami Kher) and a senior’s daughter Rahila Kaul (Himika Bose), the sister and girlfriend respectively of a boy framed in a narcotics case.

Her life in a tailspin, Avinash’s wife Abha (Nithya Menen) is determined not to let her tormented husband’s plight cast a shadow on their daughter Siya (Ivana Kaur). Her predicament constitutes the core of Season 2 of Breathe: Into the Shadows. She obviously has Avinash on her side in the bid to keep Siya out of harm’s way, but the man’s unpredictable impulses make it difficult for her to depend solely on him. She forms other alliances.

The methods it employs may be comparatively simpler, but Breathe Season 2 still peddles weirdly twisted ideas about the lines that separate right from wrong and about mental illness and its manifestations without being genuinely interested in either but for what they contribute to the killer-on-the-prowl genre. It plays a few of its cards with marginally more logic and transparency than before.

There was so little to be enthused over the first time around that the slightest improvement in the new season seems at times like a very big deal. It isn’t because Breathe: Into the Shadows S2 does not ever snap out of its lumbering rhythm. With more convolutions than conviction at its core, it continues to languish in crevices of darkness.

Created and directed by Mayank Sharma and produced by Abundantia Entertainment, the eight new episodes of the Amazon Prime Video series banks on the principal actors and a handful of surprise elements to bail it out of the drudgery that besets the plot.

The principal narrative devices, which hinge on the Ravan killer’s rampage and the determined efforts of committed crime-buster Kabir Sawant (Amit Sadh) and his two lieutenants Prakash Kamble (Hrishikesh Joshi) and Jai Prakash (Shrikant Verma) to stop the mayhem, are leaden-footed, if not slapdash.

Abhishek Bachchan, Amit Sadh, Nithya Menen and Saiyami Kher, reprising their Season 1 roles, do all that they can to give the show the impetus it sorely needs. But the repetitious nature of the face-off between the split-personality protagonist and the brooding lawman does not make for a particularly exciting thriller.

In Season 1, Avinash’s vengeful avatar, J, had killed four people guilty of the sins of anger, lust and suchlike. With six targets still on the list, Season 2 has more kills. At least a couple of the men who die aren’t among J’s predetermined targets. They add to the body count and provide diversions that do spring a surprise.

The policemen have no clue about the identity of the individual responsible for one of these two murders although the audience is in the know from the word go. The killer’s face is hidden behind a pixelated image that has been split into 150 parts. J’s accomplice and admirer Victor strings the Delhi crime branch cyber cell along with a canny game of his own that rests on piecemeal uploading of the picture in question.

The fight to the finish between the policeman and the outlaw delivers only mild thrills and stray twists, neither of which do much to lend the psychological drama either the pace or the tension that would have elevated it above the predictable and conventional.

J targets people who have caused him stress and trauma at different points in his life. Among them are a retired psychologist (Seema Biswas) and a sightless ventriloquist (Mantra Mugdh). Ego, delusion, insensitivity, selfishness, pride and betrayal are the cardinal sins that his victims have to pay for.

A doctor suffers the consequences of succumbing to more curiosity than is good for him while a hotshot automobile designer, misled into believing it is safe for him to leave the safety of Dubai and travel to Delhi, is punished for an act of arrogance.

The story moves back and forth in time to reveal the links between J’s present acts and the past grouses that trigger his fury, an emotion that Avinash is conscious of only when his daughter is exposed to the repercussions of his repeated brushes with the law.

One character says to Kabir Sawant that she does not agree with the notion that anger is purest human emotion. It is guilt, she asserts. It is guilt that makes us human. Avinash is human enough to understand that in trying to put an end to J by doing his bidding he himself is become more and more like J.

“For this to end, someone has to die,” Avinash declares. The coup de grace, which takes place during a Dussehra celebration and a Ram Leela performance, isn’t as dramatic as a startling twist in the protagonist’s relationship with his wife – it is sprung on the audience arbitrarily and without much to-do – suggests.

Breathe: Into The Shadowsnever seeks to delve deep enough into any sort of moral or psychological complexity, choosing instead to address what is on the surface. What lies beneath peeps out once in a while but does not get the sort of attention that might have lent the series the potency it lacks.