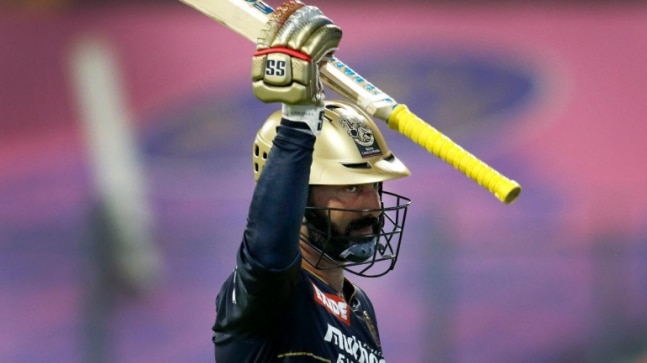 India wicket-keeper batsman Dinesh Karthik has penned a note for RCB fans after his selection in the Indian T20 World Cup side.

Veteran wicket-keeper batter Dinesh Karthik secured a place in the Indian team for the T20 World Cup, scheduled to be held in Australia in the months of October and November. Karthik was able to secure his position after a tremendous career revival in the Indian Premier League, with the Royal Challengers Bangalore, who gave him the role of a specialist finisher.

With renewed clarity after getting left out from Kolkata Knight Riders, Karthik showed his batting prowess and his cricketing intelligence, playing resourceful knocks for the franchise. After a successful season with an average of 55 and strike rate of 180+, Karthik was called back into the Indian side.

Since coming back in the Indian time, Karthik played a series-saving knock against South Africa at home, and was even selected ahead of Rishabh Pant in India’s opener in Asia Cup.

As good wishes flowed from fans after his T20 World Cup selection, Karthik took to Twitter to thank the RCB fans. In his note, Karthik wrote that he is ever grateful for the chants that he gets.

Most importantly to all the RCB fans who chant RCB,RCB even when am in my blues representing team INDIA , I LOVE YOU GUYS,” he posted on Twitter.

Most importantly to all the RCB fans who chant RCB,RCB even when am in my blues representing team INDIA , I LOVE YOU GUYS.

India announced their T20 World Cup squad on Monday, September 12. They management retained the majority of the team from the 2021 World Cup, but made essential changes in the bowling department. The selectors chose to completely rehaul the spin department and added Harshal Patel, Arshdeep Singh to the bowling line-up in place of Mohammad Shami.