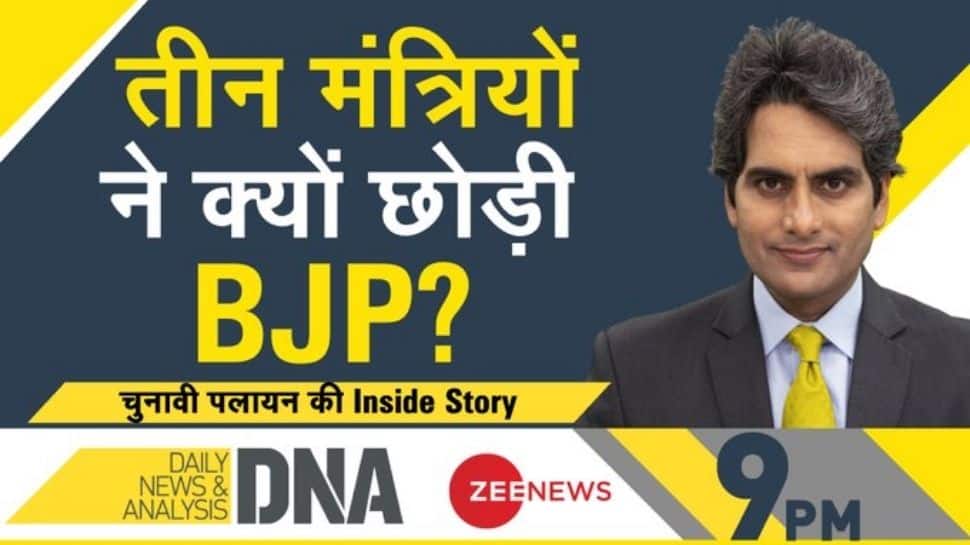 New Delhi: Swami Prasad Maurya, former leader of the  Bharatiya Janata Party and a minister in CM Yogi Adityanath’s cabinet in Uttar Pradesh, swapped sides just days ahead of the crucial assembly elections 2022 in the state. The incident triggered an exodus of 7 BJP leaders, popular among the backward class, in a major jolt to the saffron party.

With just a few weeks left to the polls, these exits are being seen as a crucial development in Uttar Pradesh politics and an attempt to create a so-called ‘Akhilesh Yadav wave’ in the run-up to the assembly elections.

Zee News Editor-in-Chief Sudhir Chaudhary, in his prime time show DNA aired on Thursday (January 13, 2022) sought to decode the factors behind the sudden exits from the BJP and its most likely impact on the upcoming assembly elections and the electorate of Uttar Pradesh.

Calling it a ”consequence of social engineering” and drawing an analogy between the outgoing BJP ministers and the ”migratory birds”, Chaudhary noted that most of the leaders who left the saffron party were not likely to get tickets for the next term and thus, switched sides in the hope of contesting elections from the other party.

Another reason behind this exit was the infamous M+Y factor, which translates to Muslim+ Yadav vote bank. This trend has been prevalent in Uttar Pradesh politics for a long time now and this time as well a significant portion of the 18% Muslim and 10% Yadav vote bank looks set to fight in favour of the Akhilesh Yadav-led Samajwadi Party.

Thus, staying in BJP would have resulted in a massive defeat for those influential backward leaders like Swami Prasad Maurya, Dharam Singh Saini and many others. Hence, they chose to switch sides.

Now, as far as the impact of this mass exodus on the ruling BJP is concerned, this can be comprehended by analysing last term’s elections in the state.

In 2017, most leaders of the M and Y class were associated with the BJP that benefitted the party, hugely. However, this time due to a massive split in caste-based vote bank, BJP might have to suffer if the votes are cast on the basis of caste/class.

Another difficultly for the saffron party is its loss of allies. The party is now left with only two allies – Nishad Party and the other is Apna Dal (S) whereas Akhilesh Yadav has formed an alliance with 6 small parties, yet another factor that seems to be working in Samajwadi Party’s favour.

It is expected that if elections are held on the basis of caste, then Akhilesh Yadav’s party will definitely benefit from that but if polling happens in the name of religion and Modi, then BJP will surely get some browny points.

Now, the foremost question that every voter must ask is – how will the current developments impact me as a voter? Will these exits and re-joinings benefit me? The answer to this pertinent question is a simple NO.

One must understand that the leaders who are solely building their premises on the basis of their caste to win a seat will never do any good either for the people of their caste, community or the state in general.

And probably, these leaders might be seen changing sides once again in the next election citing neglect towards the backward classes, for which they actually did nothing.