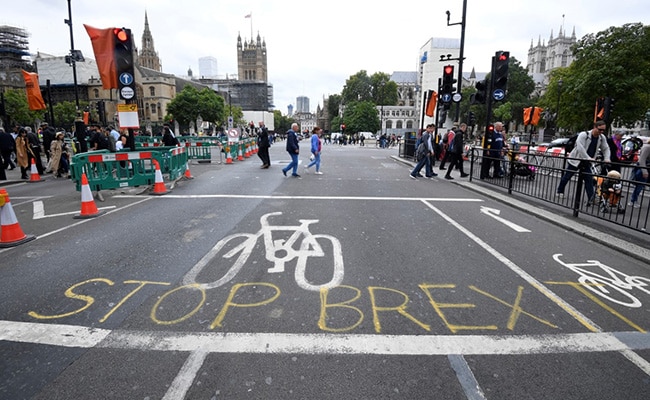 The European Union said on Friday that Britain had made no move to seek a compromise on post-Brexit trade with Northern Ireland and cautioned London against triggering emergency unilateral provisions in the Brexit deal.

Prime Minister Boris Johnson’s Brexit negotiator David Frost ruled out immediately triggering such provisions, a move that would sour ties with the EU, concern the United States and anger Ireland.

But Frost made clear he wanted Brussels to offer more.

Maros Sefcovic, a deputy head of the bloc’s executive European Commission, said the EU had “seen no move at all from the UK side.”

“We hear a lot about Article 16 at the moment,” Sefcovic said after talks with Frost. “Let there be no doubt that triggering Article 16 to seek the renegotiation of the Protocol would have serious consequences.”

Britain has repeatedly warned that it may trigger emergency measures called Article 16 which allows either side to take unilateral action if they deem their agreement governing post-Brexit trade is having a strongly negative impact on their interests.

Sefcovic said triggering Article 16 would lead to instability in Northern Ireland and amount to a rejection of the EU’s attempt to find a compromise. He said he would go to London to continue talks next week.

Frost “underlined that progress had been limited and that the EU’s proposals did not currently deal effectively with the fundamental difficulties in the way the Protocol was operating,” a British spokesperson said of the talks.

“In the UK view, these gaps could still be bridged through further intensive discussions,” the spokesperson said.

Britain left the bloc last year, but it has since refused to implement some of the border checks between its province of Northern Ireland and EU member Ireland that the 27-nation union says London is obliged to under their divorce deal.

London says the checks are disproportionate and are heightening tensions in Northern Ireland, putting at risk a 1998 peace deal.

The 1998 peace deal largely brought an end to the “Troubles” – three decades of conflict between Irish Catholic nationalist militants and pro-British Protestant “loyalist” paramilitaries in which 3,600 people were killed.

By putting checks on some goods crossing between mainland Britain and Northern Ireland, many pro-British unionists say the protocol has breached the 1998 peace settlement. The EU says tighter controls are necessary to protect its single market of 450 million people.

“We are not going to trigger Article 16 today, but Article 16 is very much on the table,” Frost told journalists.

A spokesperson for Johnson told reporters Britain would press on with negotiations to try to resolve the issues with the so-called Northern Ireland protocol that governs post-Brexit trade with the province.

As expectations grow that London might resort to that option, Frost said the best way of avoiding it was “if we can reach an agreement, an essential agreement… that provides a sustainable solution”. He said there was a “significant” gap between the EU and the UK on the matter and that time was running out for his negotiations with Sefcovic.