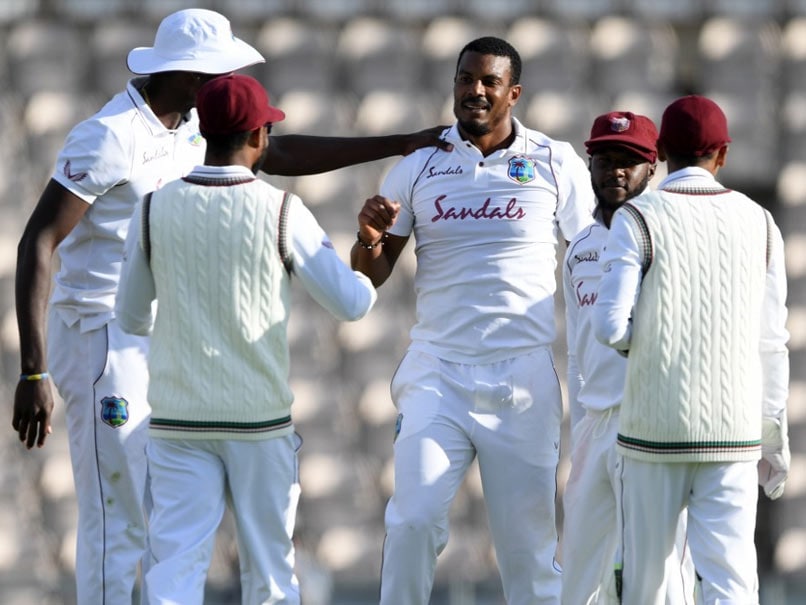 Alzarri Joseph struck twice and West Indies captain Jason Holder removed England stand-in skipper Ben Stokes as the tourists regained the initiative in the first Test with a late flurry of wickets at Southampton on Saturday. England were 284-8 in their second innings at the close of the fourth day, a lead of 170 runs in a match that marks international cricket’s return from lockdown. England fought back during a fourth-wicket partnership of 98 between Zak Crawley and Stokes.

But their 249-4 was soon transformed into 279-8 as five wickets fell for just 30 runs inside the final hour.

No sooner had Stokes fallen, then Crawley was caught and bowled by paceman Joseph for a Test-best 76.

Suddenly, England’s two batsmen at the crease – Pope and Jos Buttler — were both on nought.

Buttler, who overturned being lbw to Holder for five, fell for nine when bowled through a huge gap between bat and pad by Joseph.

World Cup-winning wicketkeeper Buttler has now made just one hundred in his 42 Tests.

And there was still time before the close for Windies spearhead quick Shannon Gabriel (3-62) to bowl both Dom Bess and Ollie Pope.

England were still one run behind West Indies’ first innings 318 when Crawley came to the crease.

But the 22-year-old, in his fifth Test, completed a well-made fifty when he reverse-swept off-spinner Roston Chase for four.

Crawley, now facing the new ball, topped his previous Test best of 66 against South Africa at Johannesburg in January.

Stokes, skippering the side in the absence of Joe Root, continued to lead from the front by driving Gabriel for four.

The all-rounder had already top-scored with 43 in England’s meagre first-innings 204 before the paceman was the pick of the hosts’ attack with 4-49.

But for the second time in the match he fell to Holder.

The towering West Indies paceman squared Stokes up and had him caught by Shai Hope, cleverly positioned as the finer of two men in the gully for the left-handed batsman.

It was a tactical as well as personal triumph for Holder, ranked ahead of Stokes as the world’s leading Test all-rounder.

There was more joy for the Windies when Crawley, aiming legside, was caught and bowled by Joseph.

England resumed on 15-0 in the first of a three-match behind closed doors series.

Although a batting all-rounder, Chase had taken a Test-best 8-60 when West Indies beat England at his Barbados home ground last year en route to a 2-1 series win.

Chase made the initial breakthrough on Saturday when Rory Burns (42) carelessly cut him to backward point.

Fellow opener Dom Sibley made a painstaking fifty off 161 balls.

The very next delivery saw Sibley play on to Gabriel only for third umpire Michael Gough to rule the bowler had been guilty of a marginal no-ball.

But, two balls later, Sibley – still on 50 — glanced Gabriel to Dowrich as he was yet again caught down the legside in his fledgling Test career.

Joe Denly, potentially competing for a place with Sibley when Root returns following the birth of his daughter for next week’s second Test at Old Trafford, needed a big score to bolster a lowly Test average of under 30.

But instead he fell tamely for 29 when chipping Chase to Holder at short midwicket.

The West Indies had been on top for most of this match, with Holder taking a Test-best 6-42 after losing the toss.

Kraigg Brathwaite then made 65, the opener’s first Test fifty in 22 innings, and Dowrich 61 as the tourists established a valuable first-innings lead of 114.