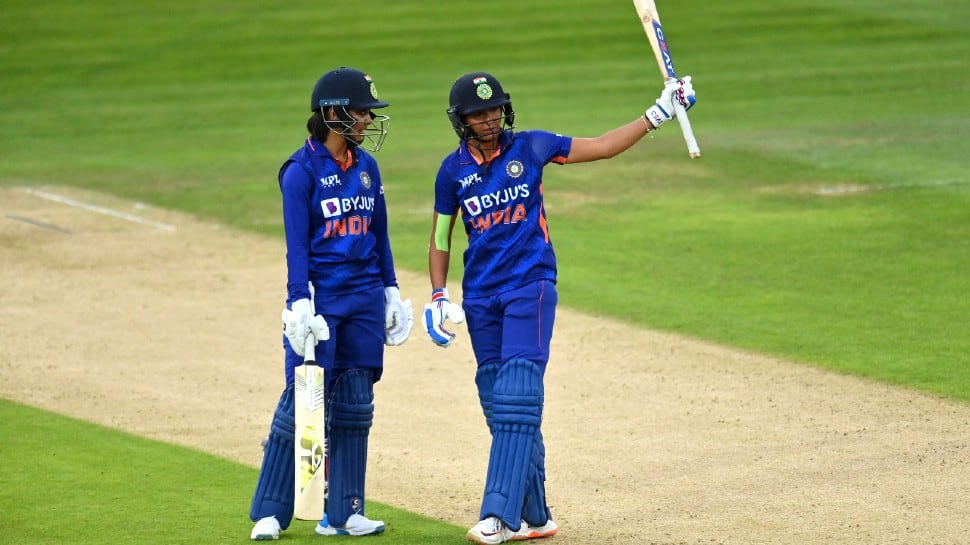 Harmanpreet Kaur smashed her second-highest score in women’s ODIs to lead a side to a massive 88-run win in the second game in Canterbury and sealed the ODI series 2-0 in their favour. Team India will now take on Amy Jones-led England in the final ODI at Lord’s on Saturday (September 24) which will also be veteran Jhulan Goswami’s final international game.


Thanks to skipper Harmanpreet’s blazing 143 off 111 balls, Team India posted 333/5 after batting first. In reply, the hosts were bundled out of for just 245 with Danni Wyatt top-scoring with 65 off 58 balls.


Pacer Renuka Thakur was the pick of the Indian bowlers, claiming 4/57 while Dayalan Hemalatha picked up a couple of wickets for six runs. “Today was a very important game for us, and everyone who got a chance contributed. I always enjoy leading, I’m always in the game, and all the support from the staff and the players,” Player of the match Harmanpreet Kaur said during the post-match presentation


“I took my time and that partnership was important. After that I gave freedom to myself and backed myself. Whoever got the chance today gave us breakthroughs,” the Indian skipper added.


On Jhulan Goswami’s final international game, Harmanpreet said, “Lord’s will be very special for us with Jhulan going to retire.”


Captain @ImHarmanpreet led from the front, hammering 143* & bagged the Player of the Match award as #TeamIndia beat England by 88 runs in the 2nd ODI to take an unassailable lead in the series. #ENGvIND

Harmanpreet scored her century in exact 100 deliveries, fifth of her career as she equalled Smriti Mandhana’s tally. Harmanpreet after reaching her ton smashed two sixes and six fours to throw England bowling in disarray as the bowlers seemed clueless against the assault.


The Indian captain’s 143 n.o. is also the highest score by an Indian woman against England as Harmanpreet bettered her own record when she scored 107 off 109 in 2013.


Harmanpreet smashed 18 fours and four sixes en route her 111-ball knock and also enjoyed a fine 112-run stand for the fourth wicket with Harleen Deol (58 off 72 balls). She also added 50 with Pooja Vastrakar (18) and another 71 runs in four overs with Deepti Sharma (15 not out) for the unbroken sixth wicket stand.


However, it was in the last three overs in which Harmanpreet literally took the game away from England’s grasp as a total of 334 being chased in a WODI looks improbable even though the pitch being a batting belter.

In the last three overs, Indian team scored 62 runs, courtesy their skipper, who was in imperious touch while reaching her fifth hundred in WODIs. The innings had Harmanpreet’s trademark slog sweeps over cow corner which fetched him a couple of sixes while there were disdainful sixes over cover region.


With the pitch offering little help for bowlers, hitting through the line was very easy and England’s bowling attack did suffer a bit with only off-spinner Charlie Dean (1/39) ending with respectable figures. The worst sufferer was debutant left-arm seamer Freya Kemp, who did decently till the end of her seventh over in which she had conceded only 28 runs.


However, in the last three overs, Harmanpreet hit her for boundaries to every single corner as Kemp ended with nightmarish figures of 1/82 at the end of 10 overs. It was the worst performance by an England women’s team debutant.


Such was Harmanpreet’s dominance that Deepti Sharma, who still holds the individual record (188) by an Indian batter in WODIs, was more of a spectator during their sixth wicket stand.