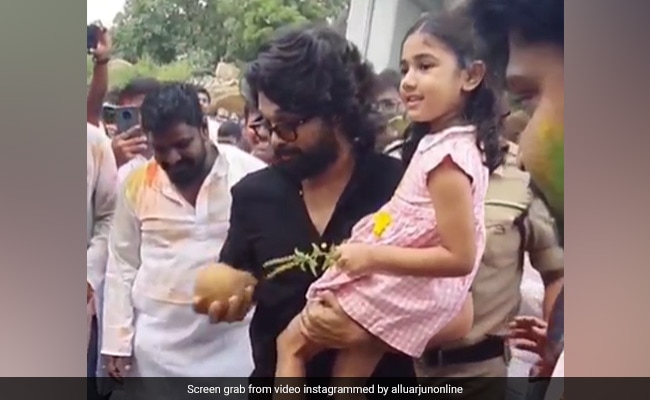 Allu Arjun and daughter in a still from the video. (courtesy: alluarjunonline)

Allu Arjun scooped some time out of his busy schedule for Ganesh Chaturthi festivities on Monday. The Pushpa actor shared a video from Ganpati Visarjan on his Instagram profile on Monday evening. The superstar was accompanied by his 5-year-old daughter Arha. In a section of the video, the actor can be seen grooving to the beats along with daughter Arha. Allu Arjun captioned the post: “Ganapati Bappa Morya.” Several fan pages dedicated to the actor also shared pictures from the father-daughter duo’s festivities on social media, that went viral in no time.

Here’s a picture from Allu Arjun’s festivities, shared by a fan club.

Allu Arjun and Sneha got married in 2011 and the couple are parents to Ayaan and Arha. Last week, Sneha shared a set of pictures from the family’s Ganesh Chaturthi festivities on her Instagram story, which were later curated by many of Allu Arjun’s fan clubs.

Another picture-perfect frame from the festivities.

On the work front, Allu Arjun was last seen in the 2021 film Pushpa: The Rise, co-starring Fahadh Faasil and Rashmika Mandanna, which was a huge hit at the box office. The film released in December, last year. Its sequel is titled Pushpa: The Rule, which is scheduled to begin production later this year.