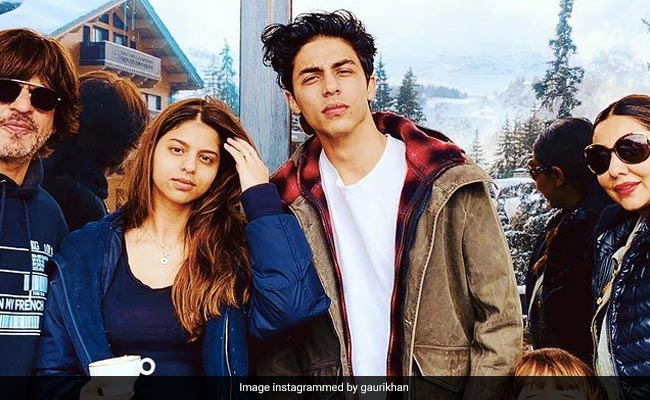 It is Shah Rukh Khan’s birthday and we all are his fans. Oh, and, if you are thinking that we are going to talk about Shah Rukh Khan – the actor, then you can’t be more wrong. On his special day, we have decided to focus on Shah Rukh Khan – the family man. There is a reason why SRK is called the “King of Romance”. His filmy love story with Gauri Khan is a blockbuster. SRK and Gauri, without a doubt are one of Bollywood’s most loved couples. Well, we can’t skip the parenting part. They have three children  – Aryan, Suhana and AbRam.  Anything and everything the Khans do becomes news. From Gauri Khan returning to the Koffee With Karan show to SRK prepping for his film releases, fans, including us, are always looking for details. When SRK decides to show up on social media, things get a bit out of control (in a good way). We must add that the actor’s Instagram exchanges with his family are equally fascinating. Now, you know where we are going. Let us take a look at some of SRK’s Instagram exchanges with Aryan, Suhana and Gauri

1. Did you tie the saree yourself

Shah Rukh Khan and Suhana Khan never fail to give major father-daughter goals. So when Suhana shared pictures of herself dressed in a saree for Manish Malhotra’s Diwali party, Shah Rukh Khan, the doting father, rushed to the comments section and wrote, “The speed at which they grow up, defies the laws of time….so elegant and graceful.” He then asked, “Did you tie the saree yourself??!!” To this, Suhana replied, “Shah Rukh Khan, love youuu. Uhh no Gauri Khan did it for me.”

It was a “big time FOMO” moment for Shah Rukh Khan when he saw this beautiful pic featuring Aryan, Suhana and AbRam. His comment read, “My little Circus – Big time FOMO.” Suhana Khan dropped a “love you” note for her dad.

3. Why don’t I have these pictures?

Aryan Khan announced his return to Instagram with a set of pictures featuring himself, Suhana and AbRam. The frames scream love from miles away. The post created a lot of noise back then. So did SRK’s comment. The actor wrote, “Why don’t I have these pictures!!!!!! Give them to me NOW!” Aryan Khan was equally quick with his perfect reply. “I’ll send them to you the next time I post…so probably in a few years haha.”

It was hard to get over Shah Rukh Khan’s comment under a set of pictures shared by Aryan Khan from a photoshoot. Aryan nailed the street-style look and how. After swiping through the pictures, this is what SRK had to say. “Looking really good!!… And as they say, that whatever is silent in the father… speaks in the son. By the way, is that grey T-shirt mine!” Once again, Aryan Khan came up with an apt reply. “Your genes and T-shirt haha,” he wrote.