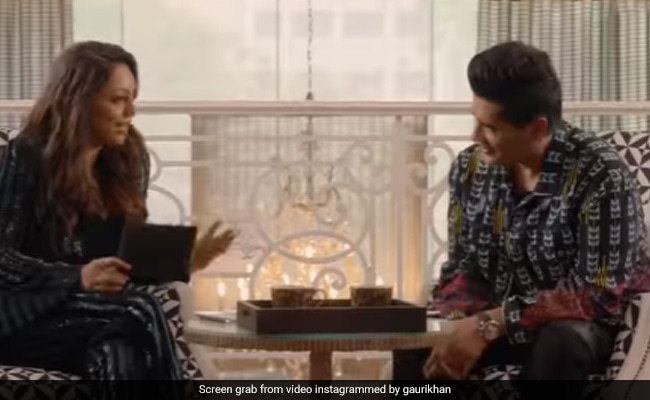 Manish Malhotra and Gauri in the promo. (courtesy: gaurikhan)

The first episode of Gauri Khan’s show Dream Homes With Gauri Khan released on Mirchi Plus on Friday. The first guest on Gauri Khan’s show was her longtime friend and ace fashion designer Manish Malhotra. Gauri Khan, in the episode, revealed that she designed his personal study area earlier and it was “too much fun.” During the course of the episode, Manish Malhotra talked about designing for Gauri for about 20 years. He also spoke about designing a lehenga for Gauri and SRK’s daughter Suhana. Coming back to the house, Manish Malhotra wanted his patio to be resigned. He told Gauri that the colour palette must comprise whites and browns. He also wanted a hint of nature and a fun lounging area.

Gauri Khan took all the pointers into consideration and gave Manish Malhotra the perfect patio in just 5 days – with a mix of contemporary flair and conventional colour choices. She changed the pristine marble flooring in a teak one for a more “earthy feel,” television for entertainment and some foliage for a hint of greenery. The result – Manish Malhotra loved the design. In his words: “Wow! This is amaze.”

Sharing the promo from the episode, Gauri Khan said, “This episode is going to be all about drama.” She captioned it: “After years of designing for me, the tables have turned Manish Malhotra.. Now I’m designing for you.”

Gauri Khan is an interior decorator and she owns the plush Gauri Khan Designs in Mumbai. She has given makeovers to several suburban Mumbai restaurants and celebrity homes over the years. She has decorated homes for several Bollywood A-listers such as Alia Bhatt, Varun Dhawan, Ranbir Kapoor and Karan Johar among others. She has designed restaurants like Arth and Sanchos. She also designed Alia Bhatt’s vanity van. Other than that, she is a film producer and made her debut as an author with a book titled My Life In Design.