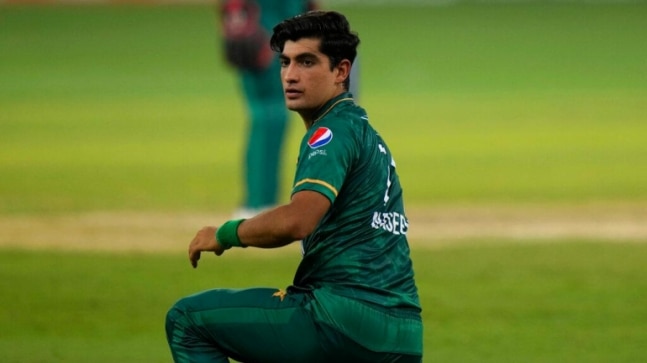 Asia Cup 2022: PAK vs AFG: Naseem Shah hit Fazalhaq Farooqi for two sixes in the final over of Pakistan’s run-chase against Afghanistan at Sharjah Cricket Stadium.

I had belief since I practice hard in nets: Naseem on match-winning sixes in AFG vs PAK. Courtesy: AP

Pakistan fast bowler Naseem Shah, on Wednesday, September 7, played a handy cameo with the bat in the Asia Cup 2022 Super 4 match against Afghanistan at Sharjah Cricket Stadium. Naseem came to bat in the penultimate over of Pakistan’s run-chase with 21 runs needed off 12 balls.

He started by picking up a couple of singles off Fareed Ahmad Malik, after which he retained strike for the final over. Thereafter, Naseem pulled off two sixes off Fazalhaq Farooqi and helped Pakistan beat Afghanistan by one wicket.

After the match, Naseem said that he always had the self-belief since he puts in the hard yards in training sessions. The 19-year-old also said that he exchanged bats with Mohammad Hasnain before hitting the sixes down the ground.

“I had the belief since I practiced hard in the nets. I exchanged my bat with Hasnain since my bat wasn’t a good one. I knew that bowlers would try to get in yorkers to me and thankfully, I connected,” Naseem was quoted as saying on Pakistan Cricket’s official Twitter handle.

“I’m happy that Pakistan qualified for the final and this match was very important,” he added.

With the win, Pakistan already qualified for the final of the tournament. Babar Azam’s men will next face Sri Lanka in their last and final Super Four match against Sri Lanka in Dubai on September 10.

They will also face Sri Lanka in the final on September 11. Pakistan started their campaign with a five-wicket loss to Rohit Sharma’s India, but have made a stupendous comeback since then.