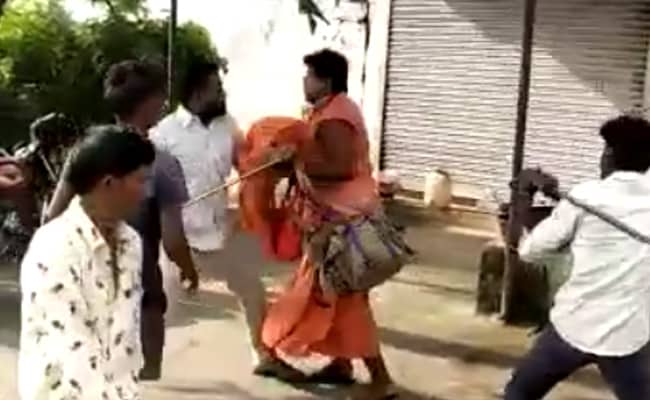 The four sadhus were assaulted at Lavana village in Sangli district.

Four sadhus were assaulted by a mob on the suspicion of being child lifters in Maharashtra’s Sangli district on Tuesday, a video of which has gone viral. The incident occurred at Lavana village in the district. Armed with sticks, the mob was seen beating the sadhus outside a grocery store in the presence of several onlookers.

Police, however, said they have not received any complaint in this regard.

“We have not received any complaint or formal report, but are looking into the viral videos and verifying the facts. Necessary action to be taken,” said Sangli SP Dikshit Gedam, according to news agency ANI.

The four sadhus from Uttar Pradesh had asked a boy for direction while on their way to the temple town of Pandharpur from Karnataka’s Bijapur, which led to the locals suspecting that they may be from a gang that kidnaps children, news agency PTI reported citing the police.

The victims had stopped at a temple the in Lavana village and the incident occurred when they were resuming their journey, the report said, adding that they got into an argument after they asked the boy for direction which escalated to the assault.

The police found that the sadhus were the members of an ‘akhada‘ in Uttar Pradesh, it said.

Maharashtra BJP MLA Ram Kadam condemned the incident and said the state government will not tolerate such “misbehaviour” with the sadhus. Strict action will be taken against the accused, he said in a video message.

“In the sadhus killing case in Palghar, then Chief Minister Uddhav Thackeray’s government meted out injustice to them. But the current Maharashtra government will not allow any injustice against any sadhu,” he said referring to the 2020 incident.

The Uddhav Thackeray faction of the Shiv Sena called the incident “unfortunate” and sought to know how many BJP leaders will visit Sangli. Terming the assault as an attempt to murder the sadhus, spokesperson Anand Dube said the government must clarify if it is with the Hindus or stop pretending that they are “Hinduvadi”.

“While the government claims to be pro-Hindu and that it protects Hindus, sadhus are being assaulted in Sangli. It was easy to level allegations when we were in power – that our government was anti-Hindu. The government must take cognizance and take stern action against the accused,” he said.