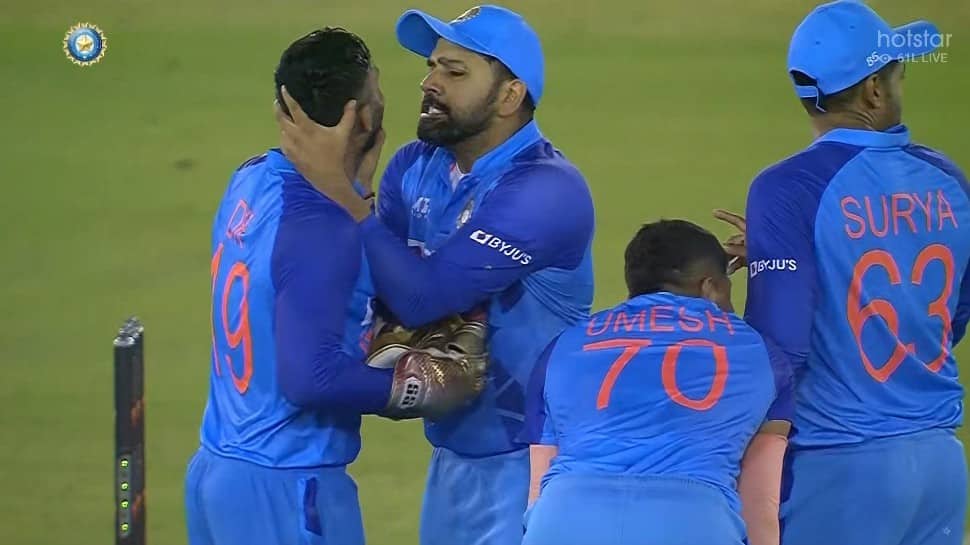 Team India failed to defend a massive 208-run total in the first T20I against T20 World Champions Australia at Mohali on Tuesday (September 20). Cameron Green and Matthew Wade powered Australia to a four-wicket win with four balls to spare against Rohit Sharma’s side.


Skipper Rohit lost his cool on wicketkeeper Dinesh Karthik during the match as well. After Axar Patel removed Aaron Finch early, Yuzvendra Chahal trapped Steve Smith in front of the stumps as he was looking to drop it on the leg side and pinch a single. What was surprising was that there was no appeal for leg-before.


Later, the replays showed that the ball was going on to hit the stumps. When Rohit saw the footage on the big screen, he was furious over the bowler and the wicketkeeper Dinesh Karthik.


A little later, Karthik wasn’t sure when Umesh Yadav trapped Glenn Maxwell in front of the stumps. Despite that, Rohit went for the review and then hilariously gave a death stare to Karthik.


Australian all-rounder Cameron Green credited opening partner Aaron Finch for keeping him calm at the crease as he opened for the first time in a T20I. After playing a match-winning knock in the first T20I of the three match series against India, the all-rounder said that he had watched the Indian batters play and that gave him an idea of how to pace his innings.


“We had the luxury of seeing the Indians bat and Hardik must be one of the best in what he does, it was a pleasure to watch him. It was kind of good to watch them bat, and that gave us an idea about how to go about while chasing,” said the all-rounder.

He praised Finch, who calmed his nerves, being on the other end of the wicket. “I was thrown into the deep end (opening for the first time) but having someone like Finchy as an experienced campaigner, he kept me calm,” Green said.