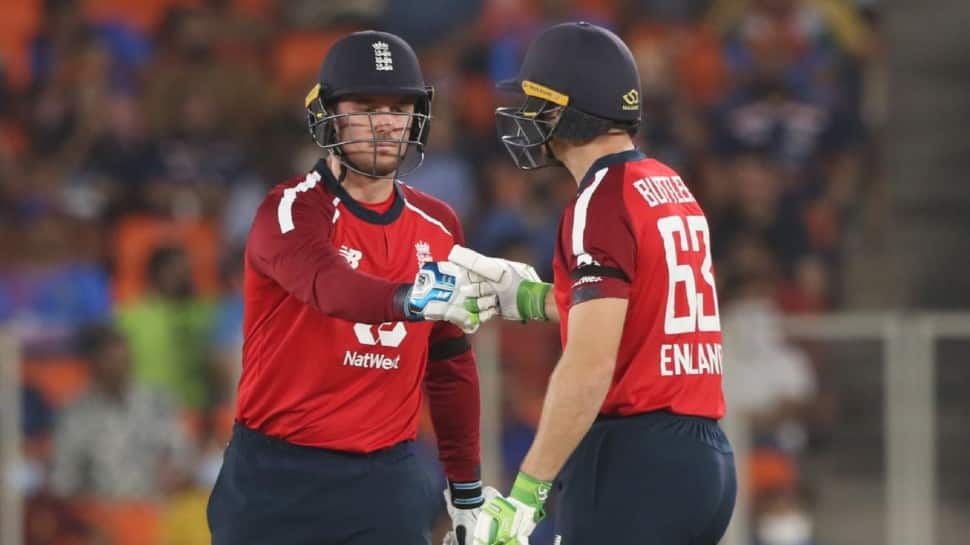 England delivered an all-round performance to thrash India by eight wickets in the first T20I in Ahmedabad at the Narendra Modi Stadium on Friday. The Eoin Morgan-led side completely outplayed the hosts to gain a 1-0 lead in the five-match series.

Chasing a paltry target of 125 runs, England got off to a brilliant start with both openers, Jos Buttler and Jason Roy, scoring regular boundaries. The duo played brilliantly and did not miss any opportunity to punish lose balls.

With the help of Buttler and Roy’s knocks, England reached the 50-run mark in the sixth over. Indian bowlers struggled to restrict the batsmen and failed to get any early breakthrough. In the eighth over, Roy scored a boundary and a six to Yuzvendra Chahal but the bowler made a stunning comeback and dismissed Buttler (28) to end the 72-run partnership. Dawid Malan then took the field.

Roy was just one run short of his half-century when Washington Sundar, in the 12th over, got hold of him. After 12 overs, England’s score read 92/2, with Malan and Jonny Bairstow on the field. Malan and Bairstow played cautiously and ensured England do not lose more wickets and easily took their side over the line.

Earlier, Shreyas Iyer smashed a sensational half-century to rescue India from early blows but England kept taking wickets at regular intervals to restrict the hosts to 124/7 in the allotted 20 overs. After being four down with 48 runs on board in the first ten overs, Shreyas and Hardik Pandya rescued India as the hosts crossed the 100-run mark in the 17th over.

But Archer in the 18th over gave just three runs and removed Hardik and Shardul Thakur on consecutive balls to jolt India’s progress. Wickets kept falling for India on one end but Shreyas (67) continued to play his shots before Dawid Malan pulled off a screamer at fine leg. In the last three overs, India scored just 22 runs and lost three wickets courtesy of some fine death over bowling by the English side.

Put in to bat first, India got off to the worst possible start as the hosts lost two big wickets inside the first three overs. While KL Rahul scored one run, skipper Virat Kohli departed for a duck.

Jofra Archer and Adil Rashid provided England a dream start and Mark Wood then extended the visitors’ upper hand in the match by removing Shikhar Dhawan in the fifth over. Wicket-keeper batsman Rishabh Pant did play some quality shots but wasn’t able to create an impact. He first reverse-flicked Archer for a six and then smashed a four to ease some pressure off but Dhawan’s wicket in the fifth over put England in the driver’s seat.

At the end of the six overs, India was 22/3, it is also the hosts’ second-lowest powerplay score in T20Is. Pant then along with Shreyas Iyer stitched a 28-run stand for the fourth wicket before he holed out to Bairstow leaving India at 48/4 in 10 overs. Shreyas continued his risk-free batting but Hardik Pandya creamed a six and a four as soon he came into bat. In the next five overs, India scored 35 runs without losing a wicket.

Shreyas soon joined the party and slammed back-to-back fours in Archer’s third over as India looked to finish off the innings on a high. The right-handed batsman scored his third half-century in just 36 balls as India crossed the 100-run mark in 17 overs. But Archer struck with two wickets in the 18th over as England staged a comeback. In the end, India was only able to score 124/7 in the 20 overs.