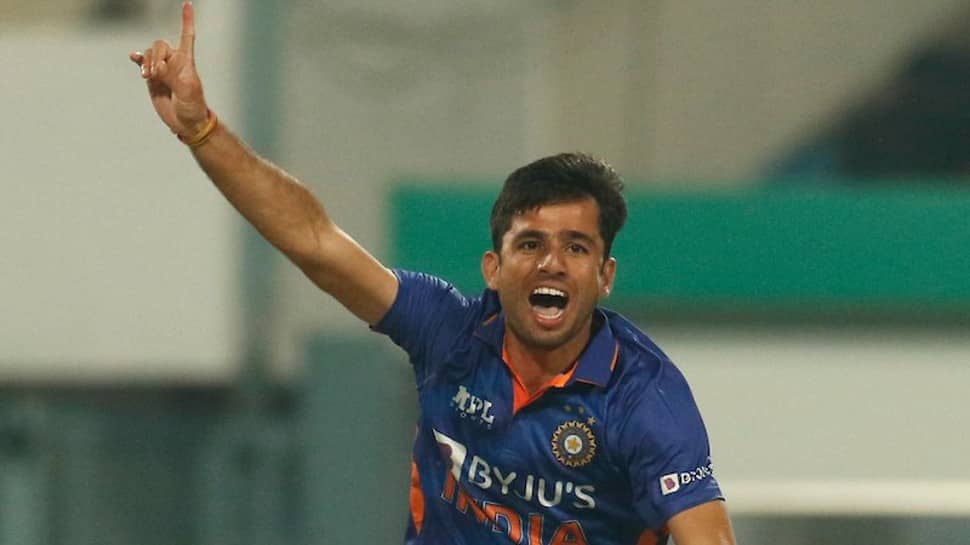 Ravi Bishnoi, on Wednesday, made a dream debut for Team India as he bagged two wickets and gave away just 17 runs in his quota of four overs in the first T20I against West Indies at Eden Gardens in Kolkata.

The young spinner, who has been roped in by Lucknow Super Giants for IPL 2022, was on-song as he dismissed Roston Chase and Rovman Powell and that too in a single over.

Bishnoi got his maiden T20I wicket in the 11th over of the innings as he had Chase (4) adjudged leg-before wicket. In the very same over, Bishnoi dismissed Powell (2) and the visitors were reduced to 74/4.

Notably, Bishnoi rose through the ranks after representing India at the U-19 level and then making a name for himself in the Indian Premier League (IPL) before getting his international cap.

Meanwhile, netizens were overjoyed to see Bishnoi shining on his international debut and some even compared him Afghanistan star spinner Rashid Khan.

Here are some of the reactions:

Ravi Bishnoi with figures of 4-0-17-2 on debut even after bowling so many deliveries to Nicholas Pooran, one of the best spin-hitters in T20 cricket right now.

Bowled away from Pooran’s arc, mixed his length and varied his pace perfectly! Top Job!#INDvWI

Ian Bishop has rightly pointed out that Ravi Bishnoi is a fast-ish off-spinner, hardly ever bowls the stock leg spinner.

He’s a taller and faster Piyush Chawla, very much in the mould of bowlers like Rashid Khan and Anil Kumble rather than Shane Warne/Kuldeep Yadav.

Play him if you can. Making the ball

Interestingly, Bishnoi had earlier missed a difficult catch of Nicholas Pooran. The youngster did pluck the ball out of the air, but his feet had touched the boundary ropes. However, Bishnoi did overcome his nerves and he inflicted double damage to the West Indies through his bowling.

Talking about the match, West Indies posted a competitive 157 for 7 against India after they were put to bat first.

Pooran, who had fetched a staggering 10.75 crore deal in the IPL mega auction, returned to form with a 43-ball 61 to anchor the innings, while another IPL recruit opener Kyle Mayers (31 off 24 balls) gave the team early impetus and skipper Kieron Pollard (24 off 19) provided the late charge.