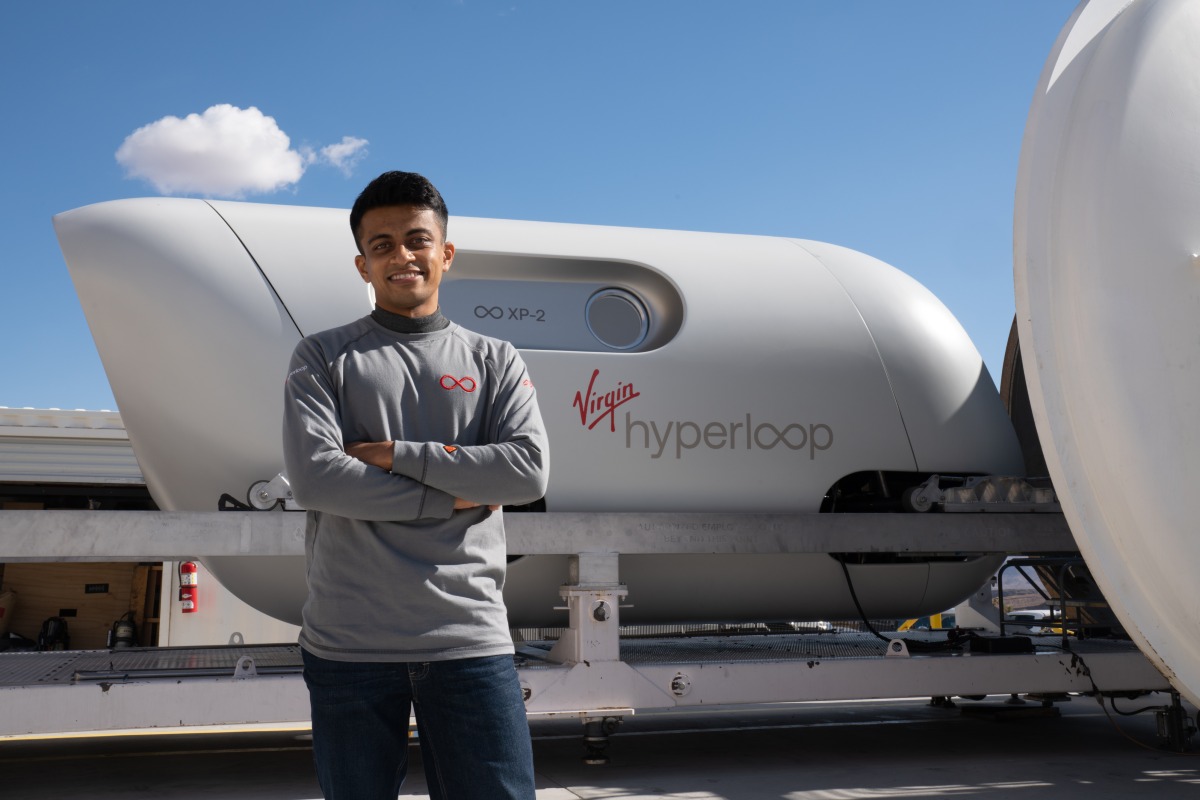 Hyperloop, the next-generation mode of transportation that aims to take passengers and goods at speeds of over 1,000 kilometres per hour, has so far been a dream for commuters globally. The same time, the technology is still at a very early stage and it is only starting to be rolled out in different parts of the world right now. Nevertheless, a Pune-born engineer who was a part of the first human test of hyperloop is quite optimistic to see the new transport mode carrying Indians in the next few years.

Working as a Power Electronics Specialist at Virgin Hyperloop, Tanay Manjrekar said that bringing hyperloop to India was a golden opportunity to leapfrog and lead the world.

Manjrekar, 29, was amongst the four people who rode hyperloop as a part of its passenger test by Virgin Hyperloop last month. The test took place at a 500-metre track in Las Vegas using a specially-designed pod, which the company calls XP-2, that had room for two people. It also came after hundreds of tests conducted on the same track, albeit without passengers.

The pod was levitated under a vacuum tube. It accelerated from zero to about 170 kilometres an hour in around six seconds and covered the total distance of around 400 metres in 15 seconds.

“It was one of its kind, it was definitely unique,” recalled Manjrekar. The test was also a trip-down memory lane for him as he has been working on the hyperloop project with the Los Angeles, California-headquartered company for over the past five years.

Irrespective of high speeds, the early riders that include Virgin Hyperloop Co-Founder and Chief Technology Officer Josh Giegel, Director of Passenger Experience Sara Luchian, IT Service Desk Lead Anne Huynh, and Manjrekar didn’t carry any safety gears and were wearing just casual clothes. This was important to highlight that hyperloop could be used just like any other modes of transport and is nowhere as different as a spacecraft.

“The way the system is designed is we have something that can be compared to a fuselage of an airplane, which is a pressurised capsule with seats inside,” said Manjrekar. “And even though you have vacuum on the outside, you still have a sustainable pod inside.”

Virgin Hyperloop is promising to provide an environment in which the passengers can move around and do whatever they want — just like how we currently travel in a train, bus, or flight. But to make that environment ready in a pod, the company ran the human test at a significant higher acceleration.

Manjrekar underlined that if any of the riders had health concerns at the time of travelling, an entire ecosystem was in place to maintain the atmosphere inside the pod, with adequate temperature and oxygen levels, and make people comfortable.

Hyperloop essentially works as a propulsion system based on electricity. The core model has not been changed since Elon Musk published a research paper back in 2013. But nonetheless, Virgin Hyperloop is making certain upgrades in the system to make it feasible for global cities.

The company is also taking references from different systems that exist today to bring hyperloop to the masses using technologies that can easily be sourced.

“It’s not based on a specific system that has ever existed,” stated Manjrekar.

Having said that, hyperloop involves a vast number of engineering challenges as despite taking existing systems as a reference, using them to build a new mass transit system requires a robust structure. The engineers at Virgin Hyperloop are, thus, taking baby steps.

“If you look at our development over the past six years, when we decided to design a propulsion system that was open air, it doesn’t have an enclosure, then it goes into an enclosed tube, and then we have people sitting in it,” Manjrekar said.

Alongside the challenges in developing the system for the mass commuters, hyperloop requires appropriate strategies for its deployment. It is similar to how a train route planned between cities needs their topological understanding.

It is all like figuring out the best route alignment and then working in that space to understand whether the vacuum tube should go through tunnels or should it be deployed on a freeway, Manjrekar noted.

The fundamental technology of hyperloop, which is to propel the pod in vacuum, remains unchanged no matter whether it is designed for tunnels or freeways. This gives a reason for Virgin Hyperloop to look at India as one of its potential markets despite conducting initial tests exclusively in the US.

“The route alignment changes, and what is the maximum speed for that given topology would change,” said Manjrekar. “But I don’t really see a lot of other things changing when it comes to the deployment of hyperloop in India.”

Manjrekar, along with some other Virgin Hyperloop engineers, is a key face of the Pune-Mumbai project. It is aimed to cover a total distance of 148 kilometres in 25 minutes. This is nearly 10 times less than the time taken via an airplane available on that route.

The project in partnership with the Maharashtra government is claimed to create 1.8 million direct and indirect jobs and bring $36 billion (roughly Rs. 2,65,403 crores) in socio-economic benefits. It is also expected to create new opportunities for Virgin Hyperloop as a large amount of manufacturing for the new transport mode will take place locally in the country.

“Personally, for me, working on the Pune-Mumbai project could be nothing more satisfying than that,” Manjrekar said.

Apart from the Pune-Mumbai project, Virgin Hyperloop is working with the state government in Punjab and Bangalore Aircraft Industries Private Limited (BAIL) to bring hyperloop technology to various parts of the country. The company is also projecting the new mode of transport as a solution not just for young commuters but also for elderly people who want to travel from one place to another in a short span of time.

“It would be a huge support for us working with, for instance, like folks from IITs, IIMs, and the different institutes that we have in India, I think that’s just a massive, massive pool of talent, which would help us do to actually deploy this across around the globe,” said Manjrekar.

“India is definitely in a position where it could lead and become the first place for commercial deployment,” added Naushad Ommer, Director of Operations for India at Virgin Hyperloop.

The company is planning to have its hyperloop system safety-certified by 2025 and make it ready for passenger operations on commercial projects by as early as 2030, the executive stated.

Virgin Hyperloop may also be able to use India as an example to expand its technology in the global markets.

“I think what India will help us to do is really push the envelope on capacity, being able to transport millions and millions of people per year. And that will really help us demonstrate and show that our system is capable of really carrying that number of people in an on-demand fashion, like nothing that’s ever been done before,” said Ommer.

Hurdles on way towards its rollout
The executives at Virgin Hyperloop have made multiple discussions with state governments as well as the central government to bring the new transport mode into reality in the country. The government think-tank NITI Aayog also last month formed a high-level panel to understand the feasibility of hyperloop technology. However, clarity on its Indian rollout is yet to be provided from the government side.

Ommer said hyperloop brought competitive fares and a safe environment to travel to help Indian commuters easily compare it with their existing transport mode. The technology is also touted to bring social-economic benefits of time saving that has become important for many people in the country — due to significant growth of working professionals who don’t have hours to travel on a regular basis.

However, the coronavirus outbreak has delayed the discussions between Virgin Hyperloop and authorities in the country. The growth of work from home culture among a large number of daily commuters that came through the pandemic may also have an adverse effect on the operational success of hyperloop initially as people who were travelling between their homes and offices are nowadays mostly staying indoors.

In terms of Indian infrastructure, both Ommer and Manjrekar of Virgin Hyperloop believe that it is appropriate to deploy hyperloop tubes. There are, however, some common challenges that exist not just in India but across the globe. 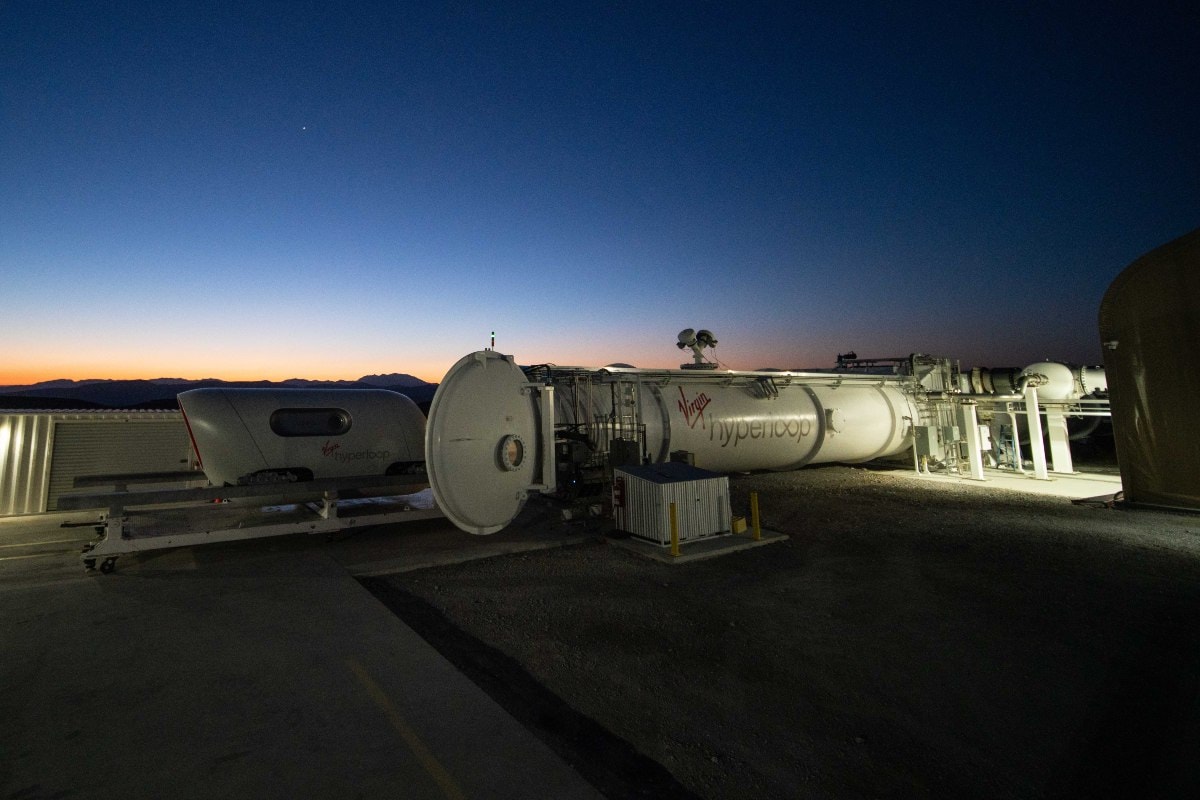 One of those is the difficulty in making sharp turns. Virgin Hyperloop mentions on its website that its model is capable of offering 4.5 times tighter turning radius, with near-zero lateral acceleration inside the pod. However, turning a pod in a vacuum tube is not as easy turning a taxi or a minibus.

Professor Satyanarayan R. Chakravarthy of the Aerospace Engineering department at IIT Madras said that test tracks for hyperloop needed to be made with turns to help engineers address turning problems at an early stage.

The other key challenge that needs to be addressed is to reduce the tube cost to make hyperloop viable for not just metro cities but also rural areas over time. Virgin Hyperloop claims that it has already cut down the cost of tunnels made for hyperloop pods to almost half by eliminating aerodynamic drag.

Professor Chakravarthy along with his IIT Madras team is also working on developing an Indian version of the hyperloop tube that could further reduce its cost.

“We have identified the pain point to be the tube cost, and have been focusing on ways to reduce it to 1/10 of what the current estimates are, so that it becomes extremely viable and something people can’t miss out on,” he said.

Virgin Hyperloop is indeed looking at all the existing challenges to become the first company to bring hyperloop to the market and start rolling it out in India. It is also working on building a pod with a seating capacity of 28 people and testing it on slightly longer tracks to grow the scope of the next-generation transportation in the coming future.

“The next steps out there are to really build the commercial system and test and certify that system out there in West Virginia,” Ommer said.

Will Apple Silicon Lead to Affordable MacBooks in India? We discussed this on Orbital, our weekly technology podcast, which you can subscribe to via Apple Podcasts, Google Podcasts, or RSS, download the episode, or just hit the play button below.