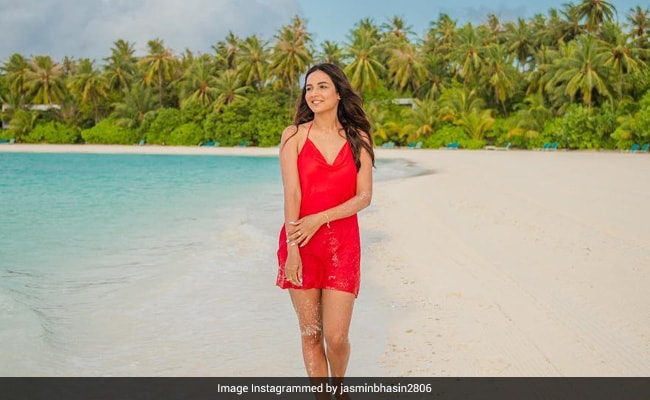 TV star Jasmin Bhasin’s Instagram profile is one giant postcard. The actress, who was missing her “island life,” shared a couple of stunning shots from the beach in Maldives. For her day out at the beach, Jasmin Bhasin opted for a red outfit. “Missing my island life,” she captioned her post. Jasmin, who was in the island nation in May this year, actively posted pictures and videos from her getaway. She posted pictures of herself with her floating breakfast and wrote: “Mandatory Maldives floating breakfast.” Jasmin also went cycling in Maldives, moments from which she did not forget to document for her Instagram.

This is what Jasmin Bhasin posted:

Jasmin Bhasin and the Maldives staple.

“Missing already,” she wrote after checking out of the island nation.

Last month, Jasmin Bhasin was holidaying in Spain. She said, “Ola from Barcelona” in this post.

The former Bigg Boss star also shared pictures and videos from her moments in Ibiza. “Lime and lemony Jasmin,” she captioned one of the photos. Posting a dance video, she wrote: “Hello from Ibiza.”

Jasmin Bhasin, a popular name in the Indian television industry, has been a part of reality shows like Bigg Boss 14 and Khatron Ke Khiladi 9. She is best-known for starring in TV shows Tashan-e-Ishq, Dil Se Dil Tak, Dil Toh Happy Hai Ji among others. She briefly starred in Naagin 4.