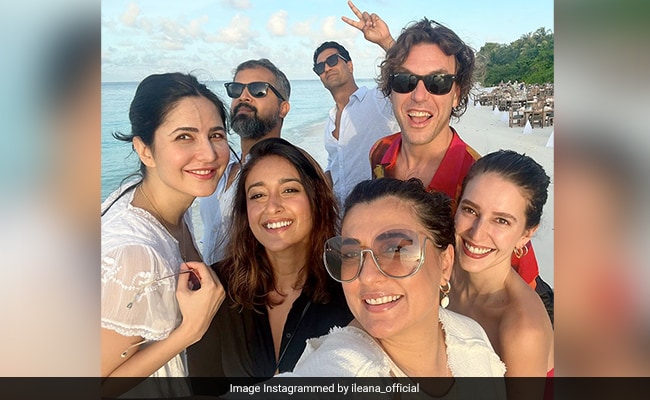 Katrina Kaif, during her appearance on Karan Johar’s chat show Koffee With Karan 7, talked about her relationship with husband Vicky Kaushal, his family and more. Speaking of families, Karan Johar asked Katrina Kaif, “There are some other Bollywood inclusions in the family like Ileana but we don’t have to confirm that.” He added, “But on a Maldives trip we saw some images came out and I was like doing the Math in my head like these two meet for the first time in a party and that moves fast as well.” Katrina Kaif added, “Karan sees everything. Karan’s eyes don’t miss anything.” He then added, “Then I see your brother and Ileana and I am just a great bystander and nothing happens in my life.”

Ileana shared multiple posts from Katrina Kaif’s birthday celebrations in Maldives this year. “Sunshine, cocktails, and a bit of birthday cake,” she captioned this one.

Some more picture of Ileana from Katrina’s birthday celebrations in the island nation.

Earlier this year, an ETimes report stated this about rumours of Ileana and Sebastian’s romance, “Sebastian and Ileana are said to be in a relationship for about six months now. Sources have it that the couple chooses to hang out at Katrina’s old residence in Bandra, at Ileana’s pad around the same part of the suburb and in London, too.”