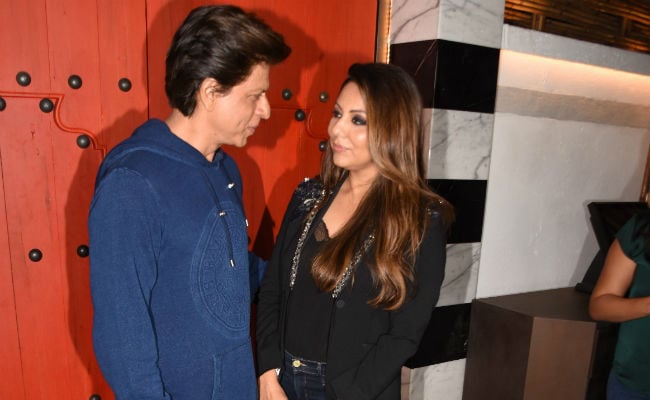 Shah Rukh Khan was MIA from the new episode of Koffee With Karan 7 but we did learn a few things about the superstar, courtesy his wife Gauri Khan, who appeared as a guest on Karan Johar’s chat show. During the show, when KJo asked Gauri, “Has it been difficult being Mrs Shah Rukh Khan,” she said, “I have to admit that he is the easiest person I have ever met. Like you give him anything to eat. Even if it has no salt or it has salt, everything is good. Anything you put in front of him, he will eat. He’s just very easy. So I just find him very comfortable with handling stuff, being at home, with the kids, with the family, with my family coming over. So he is just born a person who is comfortable with people around him. Put him in any situation, he just knows how to deal with it and be comfortable and not throw his weight around. So this is one thing I just love about him.”

Speaking of SRK’s hospitality, Karan Johar revealed that the actor always walks his guests out after a party. Reacting to which, Gauri said, “He is always seeing off the guest to their car. Sometimes I feel like he spends more time outside than inside the hour during parties. Then people start looking for him. It makes me feel like we are having the party outside on the road rather than inside the house.”

“I have seen that you are bone honest with Shah Rukh. I will not mention the movie, but I have been at a screening, where we were watching a film of SRK’s that was not very good. And half way through the film you had tapped me, and said you are liking this movie?” said KJo, recalling an incident. To which, Gauri replied, “And if he’s showing me, he wants my opinion, it has to be what I feel, and what you know, the truth. And nothing but the truth. And also, when I speak to him, I won’t be harsh, and I won’t be you know demeaning. And I will not ever use those words, which will hurt him. I put it across in a way, I’ll still be honest. I can be like I can talk with you on the side. But obviously I put it in a more polite manner. You know, I know how to talk to him, but I do put my point across.”

When Gauri Khan  was asked about the film title for her love story with SRK, she said, “Dilwale Dulhaniya Le Jaaenge. I love that film.” KJo then said, “And yours was quite a turbulent love story.” Gauri added, “Yes, it was.”

During the last round, where the guests are asked to call their celebrity friends, Gauri Khan called Shah Rukh Khan, which won her 6 points. “Hi Karan, how are you?” asked SRK after picking up the call. To which, KJo replied, “Very happy to speak to you. You just earned your wife six points.” Shah Rukh Khan’s ROFL reply: “Ji Gauri, humare saath rahoge toh aise hi points milenge (If you stay with me, you’ll keep winning points like this).”

Shah Rukh Khan married Gauri Khan in 1991. The star couple are parents to Aryan, 24, (their eldest child), who graduated from University Of South California. Their daughter Suhana will soon make acting debut with Zoya Akhtar’s The Archies. SRK and Gauri are also parents to AbRam, who attends school in Mumbai.