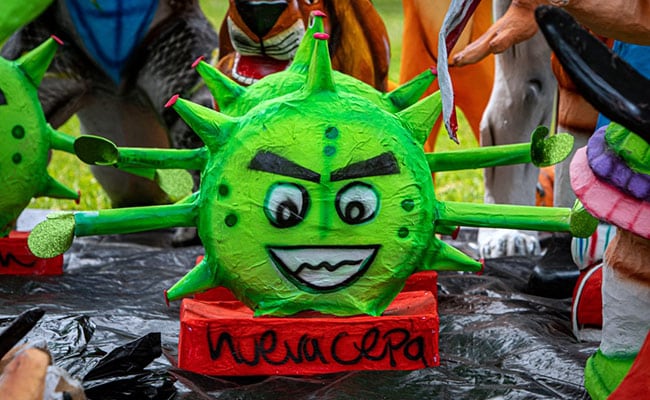 Coronavirus has killed more than 5.4 million people globally till now.

Millions around the world braced Thursday for drastically curtailed New Year celebrations as record coronavirus cases fuelled by the Omicron variant saw the WHO warn a Covid “tsunami” threatens to overwhelm healthcare systems.

Coronavirus, first detected two years ago and declared a global pandemic in March 2020, has killed more than 5.4 million people, triggered economic crises and seen societies ricochet in and out of lockdowns.

The latest variant, Omicron, while tentatively considered to cause milder illness, has pushed infection levels to record levels in recent days in the United States, Britain, France and other European countries, forcing governments to reimpose restrictions.

The number of daily new Covid cases worldwide crossed one million for the first time, according to an AFP tally Thursday, with more than 7.3 million in the last seven days.

From Greece to Mexico, from Barcelona to Bali and across swathes of Europe, authorities have cancelled or curtailed public gatherings, either closing or imposed curfews on nightclubs.

In France, wearing masks outdoors will be compulsory while walking the streets of Paris from Friday for everyone over the age of 11. Nightclubs have been closed until well into January.

In Spain, public festivities have been cancelled across most regions and in the biggest cities except Madrid, where a stripped-down gathering is scheduled with the crowd limited to 7,000 people compared to 18,000 in 2019 before the pandemic swept Europe.

On Thursday, Britain’s National Health Service announced that it would start opening temporary field hospitals to contain a possible overspill of inpatients in England, where the government stopped short of mandating curbs on New Year festivities.

“Given the high level of COVID-19 infections and increasing hospital admissions, the NHS is now on a war footing,” National Medical Director Stephen Powis said.

Indonesia, which has reported more than 4.2 million confirmed cases, warned that foreign travellers may be deported from the resort island of Bali if they are caught violating Covid health rules during New Year.

“Get ready to be kicked out,” Bali immigration office head Jamaruli Manihuruk told AFP. Bali has barred carnivals, fireworks and gatherings of more than 50 people over the Christmas and New Year period.

Mexico City has also cancelled its massive New Year’s Eve celebrations as a preventative measure after a rise in Covid cases.

“I feel that this casts doubt on a lot of what we thought was already secure, because it is scary, it is worrying,” said Aaron Rosas, an engineering student.

“By doing that cancellation they are sending a message in a way: ‘You know what? This is serious’,” said teacher Victor Arturo Madrid Contreras.

In Saudi Arabia, authorities reimposed social distancing measures at the Grand Mosque in the Muslim holy city of Mecca, after recording the highest number of infections in months.

“I am highly concerned that Omicron, being more transmissible, circulating at the same time as Delta, is leading to a tsunami of cases,” said WHO chief Tedros Adhanom Ghebreyesus.

“This is and will continue to put immense pressure on exhausted health workers, and health systems on the brink of collapse.”

Omicron has already started to overwhelm some hospitals in the United States, the hardest-hit country, where the seven-day average of new cases has hit 265,427, according to a Johns Hopkins University tracker.

Harvard epidemiologist and immunologist Michael Mina tweeted that the count was likely just the “tip of the iceberg” with the true number likely far higher because of a shortage of tests.

“Half of my family has it,” said Victoria Sierralta at a testing site in Miami. “It’s like we’re back in like the first stage of Covid. It’s absolutely crazy.”

The NBA, NFL and NHL are scrambling to keep teams competing and sports leagues are grappling with how best to adjust their coronavirus protocols to protect players, staff and fans while keeping their schedules intact.

In China, residents in the city of Xi’an, where 13 million people are under lockdown, said they were struggling to find enough food, despite Beijing insisting that there were adequate supplies.

“I live on…. a bowl of porridge every day, just to keep alive,” one resident surnamed Wang told AFP, saying she was working through all her supplies.