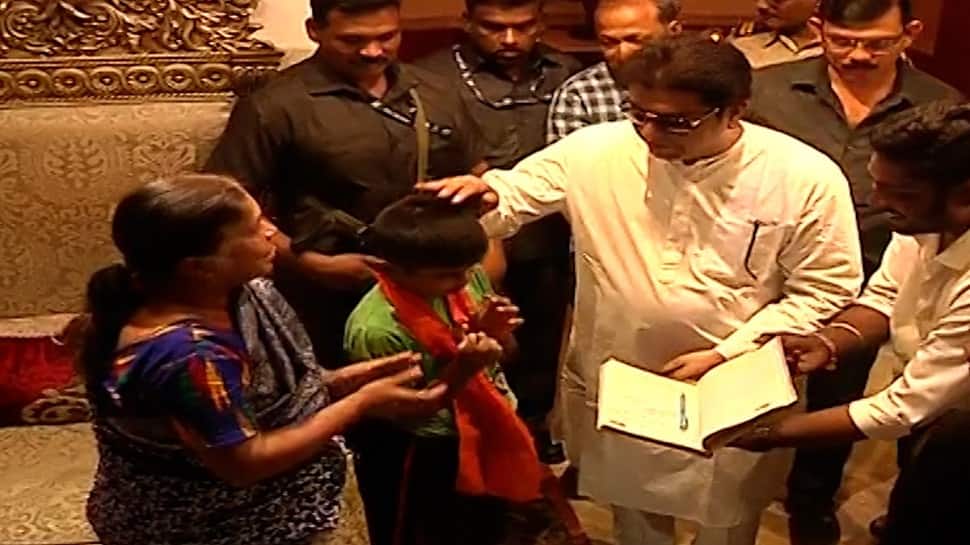 MNS President Raj Thackeray who is currently on a Vidarbha visit for five days from today, reached Nagpur by train on Sunday morning. On this occasion, he received a warm welcome from his supporters and activists at Nagpur railway station. There was a huge crowd to welcome Raj Thackeray. Meanwhile, a strange incident has come to the limelight. It is always said that Raj Thackeray and his oratorical style have appealed to the general public. But the influence of Raj Thackeray’s personality has a great impact on kids also. One such incident that brings proof of this happened today in Nagpur. A ten-year-old boy had been waiting in front of the hotel since morning with his grandmother insisting that he wanted to meet Raj Thackeray.

Raj Thackeray entered the hotel around 9:30. At that time, some workers from Nagpur saw this little boy standing in the corner. He was advised to go to Ravi Bhavan and meet Raj Thackeray in the afternoon. But the child and his grandmother were not ready to move from there. Finally, he was allowed to enter the hotel. Activists told Raj Thackeray that, “a ten-year-old boy wants to meet him. He has been starving since morning.” Then Raj Thackeray, who was sitting on the upper floor, sent a message to the little boy who was sitting on the ground floor, “You have your breakfast first, eat something. Only after that I will meet you and give you, my autograph.” As directed by Raj Thackeray, the toddler had his breakfast and then it was five minutes past eleven when Raj Thackeray left the hotel to go to Ravi Bhavan. So, first of all, he met the boy after coming out of the lift. He gave his autograph on a diary the ‘little fan’ had brought with him and after greeting him, Thackeray left for Ravi Bhavan.

Raj Thackeray has become active in the wake of municipal elections in Maharashtra. A meeting was organized by Raj Thackeray with activists and office bearers in Nagpur. In this meeting, Raj Thackeray expressed his belief that change is a law of nature and it will be fixed and advised the workers to strengthen the party from the ground level. Raj Thackeray also gave some suggestions. Thackeray said that he does not have that much strength in Nagpur, so party building is necessary to achieve good success. Raj Thackeray assures office bearers that he will continue to come, but they have to work hard and build the party.

Also Read: ‘Will soon DEAL with both ‘Razakar’ and ‘Sajakar’…’, Raj Thackeray gives BIG warning in an OPEN letter


Raj Thackeray said, “We will reform the party and have to build the party at the local level.” At this time, Raj Thackeray also suggested that more efforts will have to be made to remove the evil that has come into the party. While saying that he will work to bring new energy to the party