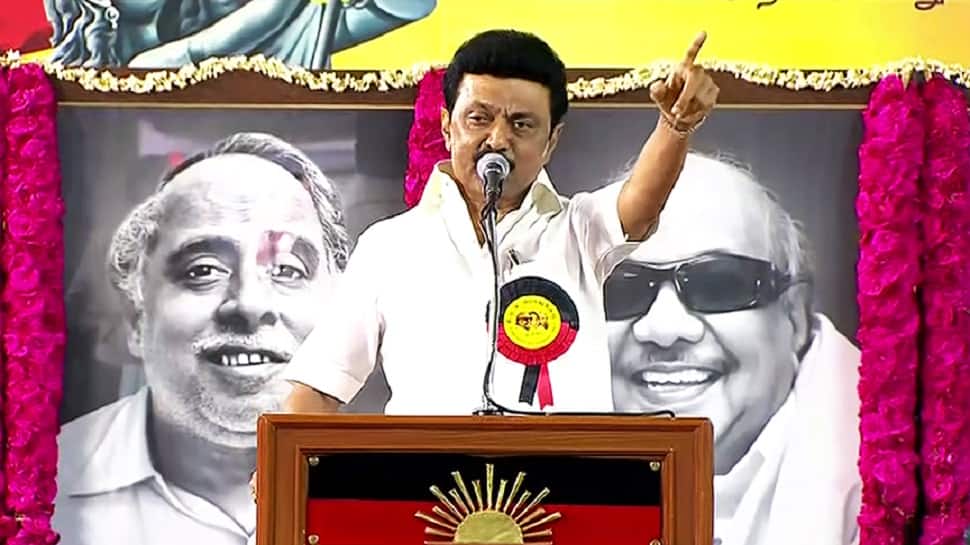 Chennai: Tamil Nadu Chief Minister M K Stalin on Sunday (October 16) staunchly opposed what he called a Parliamentary panel’s “recommendation” that for specific jobs, aspirants should have learnt the Hindi language. Writing to Prime Minister Narendra Modi, Stalin referred to media reportage on a report of the Parliamentary Committee on Official Languages.


Stalin said, “It has been reported that the Committee, chaired by Union Home Minister Amit Shah, submitted its report to the President of India, wherein inter-alia, has recommended that Hindi should be the compulsory medium of instruction in educational institutions of the Union government such as IITs, IIMs, AIIMS and central universities and Hindi should replace English.”


It also includes a recommendation that Hindi shall be made as the medium of instruction in all technical, non-technical institutions and all the Union government institutions including Kendriya Vidyalayas.


The Chief Minister, who is also the president of the ruling DMK said that it has been recommended by the panel that, “youth would be eligible for certain jobs only if they had studied Hindi, and removal of English (is proposed) as one of the compulsory papers in recruitment exams.” Such proposals went against the federal principles of Constitution and would only harm the nation’s multi-lingual fabric, he said.


Efforts to “impose” Hindi in various ways as recommended in that report should not be taken forward and the “glorious flame of unity of India may be held high forever,” the Chief Minister requested. Stalin demanded that all languages should be accorded the status of official language of the Union government.


All the regional languages, including Tamil, should be treated equally and that is the way to ensure the principle of unity in diversity. There are 22 languages including Tamil in the Eighth Schedule of the Constitution. All such languages have equal rights and there are several demands that some more languages should also be included under the schedule.


“I would like to point out that the number of people speaking languages other than Hindi is numerically more than Hindi-speaking people in the Indian Union. I am sure you would appreciate that every language has its own specialty with its uniqueness and linguistic culture.”

He recalled Tamil Nadu’s consistent opposition to Hindi “imposition,” the massive agitations in 1965 in the state and former Prime Minister Jawaharlal Nehru’s assurance that English would continue to be one of the official languages as long as the non-Hindi speaking people wanted.


“Subsequently, the resolutions passed in 1968 and 1976 on official language, and according to the rules laid down thereunder, ensured the use of both English and Hindi in union government services. This position must continue to remain as the corner stone of all discussions on official language.”


The Centre’s recent attempts to “impose Hindi” are impractical and divisive in character puts non-Hindi speaking people in a very disadvantageous position in many respects. “This will not be acceptable not only to Tamil Nadu but also to any state that respects and values their mother tongue.”


On October 10, Stalin appealed to Modi to give up attempts to “make Hindi mandatory” and uphold the nation’s unity. “Do not force another language war by imposing Hindi,” the DMK chief had said. Kerala Chief Minister Pinarayi Vijayan also had taken exception to the panel’s recommendation. DMK and CPI(M) are allies in Tamil Nadu.

On Saturday, the ruling DMK’s youth wing secretary and Stalin’s son, Udayanidhi Stalin warned the Centre that his party would stage a protest against it in Delhi if Hindi was thrust upon Tamil Nadu.


A parliamentary panel has recently recommended that the medium of instruction in technical and non-technical higher education institutes such as the IITs in Hindi-speaking states should be Hindi and in other parts of the country, the respective regional languages.