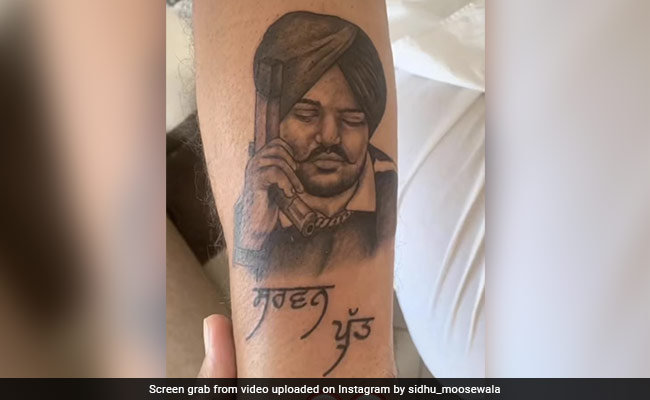 In the picture, the singer is seen posing with a gun next to his face.

In an emotional tribute to murdered Punjabi singer Sidhu Moose Wala, his father Balkaur Singh got his son’s face tattooed on his arm. A video posted in the ‘stories’ section of the popular rapper’s official Instagram page showed his father lying on a bed while a tattoo artist copies a picture of Moose Wala from a phone, inking it on Mr Singh’s forearm in black.

In the picture, the singer is seen posing with a gun next to his face.

Below the portrait of his son, Balkaur Singh also got ‘Sarwan Putt’ inscribed in the Gurmukhi script. ‘Sarwan Putt’ means obedient and caring son.

Mr Singh has publicly broken down remembering his son on many occassions. After the singer’s cremation, he had removed his turban and held it out in his hands towards a sea of people, in what many believed was a moving gesture to show he has lost everything.

Earlier this month, Balkaur Singh had claimed that several attempts were made to attack his son during the Punjab assembly elections in April and the Aam Aadmi Party-led state “government too left no stone unturned” to curtail his security and “publicised” the withdrawal of his security,

“Sixty to eighty people were after him (Sidhu Moose Wala) to kill him. Efforts were made at least eight more times during the elections to kill him. The government too left no stone unturned, withdrew his security and publicised it,” he had said.

Sidhu Moose Wala, the 28-year-old singer, was gunned down near his village in Mansa on May 29, a day after his security was scaled down by the newly formed Bhagwant Mann government.

Balkaur Singh was following his son in a car with two armed personnel when the killers rained bullets on the singer and his two friends.