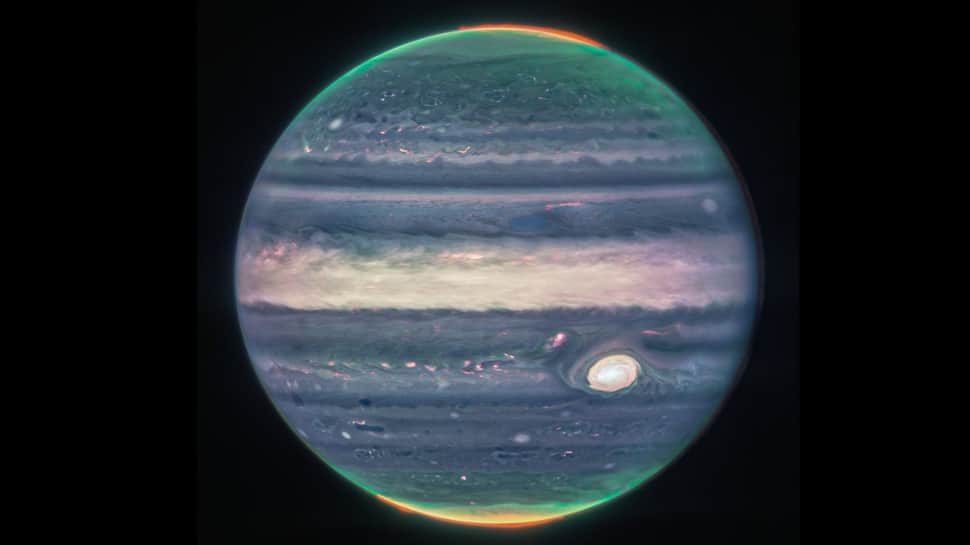 New Delhi: NASA’s James Webb Space Telescope has captured new stunning images of Jupiter that will give scientists even more clues to the planet`s inner life. With giant storms, powerful winds, auroras, and extreme temperature and pressure conditions, Jupiter have a lot going on. In the standalone view of Jupiter, created from a composite of several images from Webb, auroras extend to high altitudes above both the northern and southern poles of Jupiter.


1. Make way for the king of the solar system!


“We hadn’t expected it to be this good, to be honest. Remarkably, we can see details on Jupiter together with its rings, tiny satellites, and even galaxies in one image,” said planetary astronomer Imke de Pater, professor emerita of the University of California, Berkeley.


The Great Red Spot, a famous storm so big it could swallow Earth, appears white in these views, as do other clouds because they are reflecting a lot of sunlight. “The brightness here indicates high altitude – so the Great Red Spot has high-altitude hazes, as does the equatorial region,” said Heidi Hammel, Webb interdisciplinary scientist for solar system observations.


In a wide-field view, Webb sees Jupiter with its faint rings, which are a million times fainter than the planet, and two tiny moons called Amalthea and Adrastea. “This one image sums up the science of our Jupiter system program, which studies the dynamics and chemistry of Jupiter itself, its rings, and its satellite system,” said Thierry Fouchet, a professor at the Paris Observatory.


The $10 billion Webb telescope is an international programme led by NASA, European Space Agency and the Canadian Space Agency. The telescope aims to solve mysteries in our solar system, look beyond distant worlds around other stars, and probe the mysterious structures and origins of our universe and our place in it.