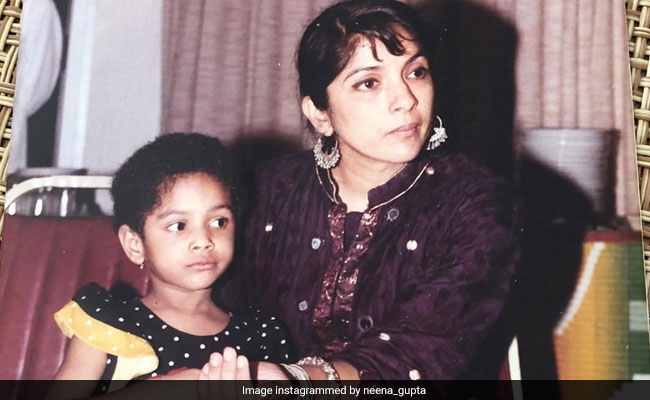 Neena Gupta, on Saturday, made a trip down memory lane and dug out an old photograph of herself and her daughter, designer Masaba Gupta. The actress, as always, accompanied her post with an ROFL caption that will definitely leave you in splits. Wondering what she did? Sharing the photo, Neena took a dig at her own epic hairstyle. In the picture, Neena Gupta can be seen sporting a black blouse and a colourful long skirt while posing with her little daughter. She wrote: “Ye matlab kya hairstyle hai, hey bhagwan (Oh God! What is this hairstyle)!” Take a look:

Reacting to Neena Gupta’s post, Sonam Kapoor commented: “Masu (Masaba), you’re so cute, I want to eat you up.” Richa Chadha also dropped a laughing and a heart emoji in the comments section.

Neena Gupta was last seen in Netflix’s original Masaba Masaba. The web-series is a semi-fictional story based on the life of Masaba Gupta and features Neena as her reel mother. Before that, Neena Gupta was seen in Amazon Prime’s web-series Panchayat. She has starred in a number of films like Aadat Se Majboor, Gandhi, Mandi, Utsav, Laila, Jaane Bhi Do Yaaron, Trikaal, Susman, Kaarnama, Khalnayak, Bhagavad Gita: Song Of The Lord, Woh Chokri, Veere Di Wedding and Panga. She will next be seen in a special appearance in Kabir Khan’s ’83, in which Ranveer Singh will be seen playing the lead role.