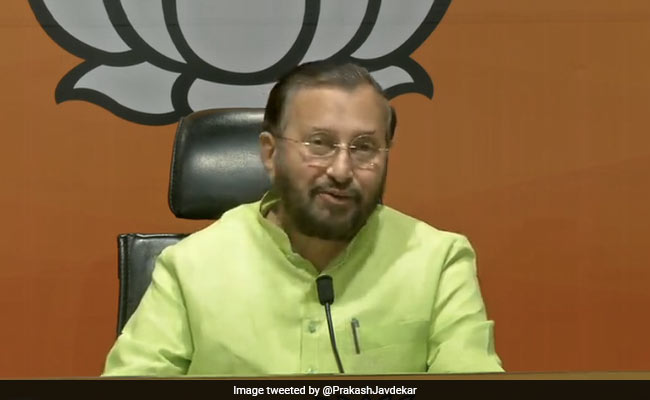 Prakash Javadekar said that atmosphere in the country changed for good since Narendra Modi became PM.

Senior BJP leader Prakash Javadekar on Monday said the opposition should understand the personality of Prime Minister Narendra Modi and the work being done by him for the people of the country and advised them not to worry about the 2024 Lok Sabha polls and instead think of the 2029 elections.

He said after Modi became prime minister in 2014, the atmosphere in the country changed for good.

The country got a prime minister who came up with different thinking and programmes, communicated directly with people and brought transparency in governance, the Bharatiya Janata Party (BJP) leader said.

The Rajya Sabha member was speaking at a function organized by the Thane city BJP for the release of a book on Modi’s 20 years in public office – 12 years as Chief Minister of Gujarat and eight years as PM.

Mr Javadekar, a former Union minister, asserted the BJP is getting electoral success repeatedly only because people like PM Modi’s work.

“The opposition should first understand the work of Prime Minister Narendra Modi. In the last 20 years, Modi has been working continuously without falling sick even once. Various programmes, activities and schemes are being undertaken by Modi.

“A patriotic atmosphere was created throughout the country through the ‘Har Ghar Tiranga’ campaign. VIP culture has become a thing of the past…document attestation, a practice that existed for decades, was abolished in one day. In 2014, an LED bulb cost Rs 200, but now it is available for 70,” he said.

The former minister in the PM Modi cabinet said because of the PM’s popularity, his party BJP now has 11 crore members, making it the largest political outfit in the world.

He said the work of the Modi goverment has touched every aspect of people’s life.

Due to this, many housewives have become BJP activists, Mr Javadekar said.

The issue of Ram temple had been pending since the last 500 years, but now a grand temple dedicated to Lord Ram is coming up in Ayodhya, he said.

The opening of the Kartarpur corridor, Buddhist circuit and improving road connectivity for Chardham Yatra have received good response from people, the BJP leader said.

“So now, the opposition should discuss the 2029 Lok Sabha elections without worrying about the 2024 polls,” said Javadekar, indicating the BJP is poised to win the next parliamentary elections.