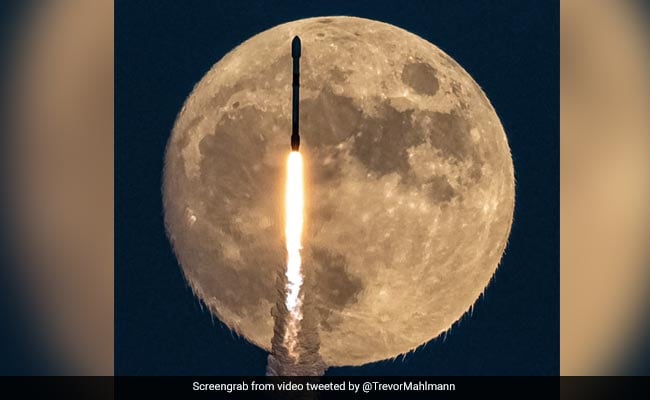 A spectacular image showing the moment a SpaceX rocket blasting off into space with an enormous full moon in the background is going viral on the internet. The stunning display came as Elon Musk’s space company launched its Falcon 9 rocket on its record-trying 14th mission on Saturday.

Taking to Twitter, photographer Trevor Mahlmann shared the image with a caption, “Captured Falcon 9 with Intelsat Galaxy 33 & 34 transiting the full Hunter’s Moon tonight from the waters of Florida’s Indian River.”

Take a look at the mesmerising photo below:

In the image, the rocket can be seen soaring into the night sky with a trail of flames underneath it directly in front of one of the Moon’s craters. In the following tweet, Mr Mahlmann also shared a GIF showing the “Falcon 9 transitioning the disc of the full Hunter’s Moon”.

Mr Mahlmann shared the image on Sunday and since it has garnered more than 8,000 likes and thousands of comments. In the comment section, internet users called the photo “incredible” and “fantastic”.

“You nailed this one Trevor! Great image!” wrote one user. “My goodness this is absolutely phenomenal!” said another.

“Un-Believable!! That is so amazing. Great work,” commented a third, while a fourth added, “WOW. That’s an insanely good pic!”

Meanwhile, as per Space.com, Falcon 9 rocket, topped with Intelsat’s Galaxy 33 and 34 satellites, lifted off from Florida’s Cape Canaveral Space Force Station on Saturday. These satellites will now be used by a variety of major media outlets, including HBO, the Disney channel, Starz and the Discovery channel.

Four more flights are also planned before the end of the year, which includes two from Cape Canaveral, Florida, using another Falcon 9, and two from French Guiana, using a European Ariane rocket.