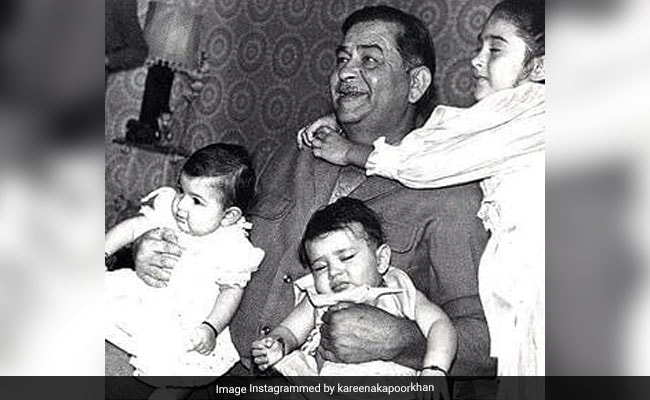 Kareena Kapoor handpicked just the perfect picture to wish her cousin Riddhima Kapoor Sahni on her 40th birthday. She posted a throwback picture from the time when she and Riddhima were kids. Oh, did we tell you that the picture also features Kareena’s sister Karisma Kapoor and their grandfather Raj Kapoor? In case you can’t identify the people in the picture clearly, we are here to help. Karisma, on the right can be seen standing next to her legendary grandfather, while Kareena can be seen sleeping on the right on Raj Kapoor’s lap. Birthday girl Riddhima can be seen sitting pretty on the left. PS_ Karisma Kapoor’s caption helped us crack who is who in the picture. LOL! Kareena shared the post on Instagram and she wrote: “Sister sledge. Happy birthday beautiful Ridz.” Replying in the comments section, Riddhima wrote: “Aww! Thank you Bebo.”

Later, Karisma Kapoor shared the same picture on her Instagram profile and she wrote in the caption: “Bebo can you please wake up? Oh! That goes for me too.” In the comments section, Karisma’s BFF Malaika Arora commented: “You both ate and passed out.” See Kareena Kapoor’s post here:

Meanwhile, on Tuesday morning, Karisma Kapoor shared pictures from Riddhima Kapoor’s birthday festivities. “Happy 40th birthday. Glad we got to celebrate with you,” she wrote.

Kareena, Karisma and Riddhima Kapoor  belong to a family of actors. Kareena and Karisma are the daughters of Randhir Kapoor and Babita. Riddhima and her brother Ranbir are the children of Bollywood veterans Rishi Kapoor and Neetu Kapoor. Rishi Kapoor died at the age of 67 in April this year.