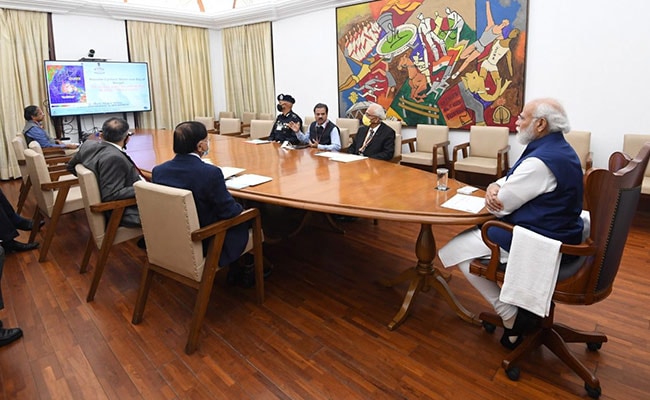 Measures to ensure evacuation, steps to maintain essential services and swift restoration in cases of disruption — these are among Prime Minister Narendra Modi’s directions to officials at a meeting to review readiness to tackle a potential cyclonic storm headed towards Odisha and Andhra Pradesh.

A government release said all ministries and agencies concerned are working together to counter the impact of the depression and the potential cyclone.

A total of 62 teams of National Disaster Response Force (NDRF) have been deployed across four states and a Union Territory — Andhra Pradesh, Odisha, West Bengal and Andaman and Nicobar Islands — that are likely to be affected.

Out of these, 29 teams equipped with boats, tree-cutters and telecom equipment have been prepositioned and 33 are on standby.

Also, the Coast Guard and Navy have deployed ships and helicopters for rescue work. Air Force personnel and the Army’s engineer corps are also on standby.

According to the weather department, Cyclone Jawad is likely to make landfall along the Andhra Pradesh-Odisha coasts early on Saturday.

Over the next two days, Andaman and Nicobar, Andhra Pradesh and Odisha will receive light to moderate rainfall at most places and heavy to very heavy rain at isolated places, the weather department has said. It added that on Saturday, some areas in Odisha may receive extremely heavy rainfall.

The weather department has warned of wind speeds up to 100 kmph in coastal areas and rough sea conditions and asked fishermen not to venture into the sea during this period.

The impending cyclone Jawad comes months after Cyclone Yaas made landfall in Odisha in May this year.