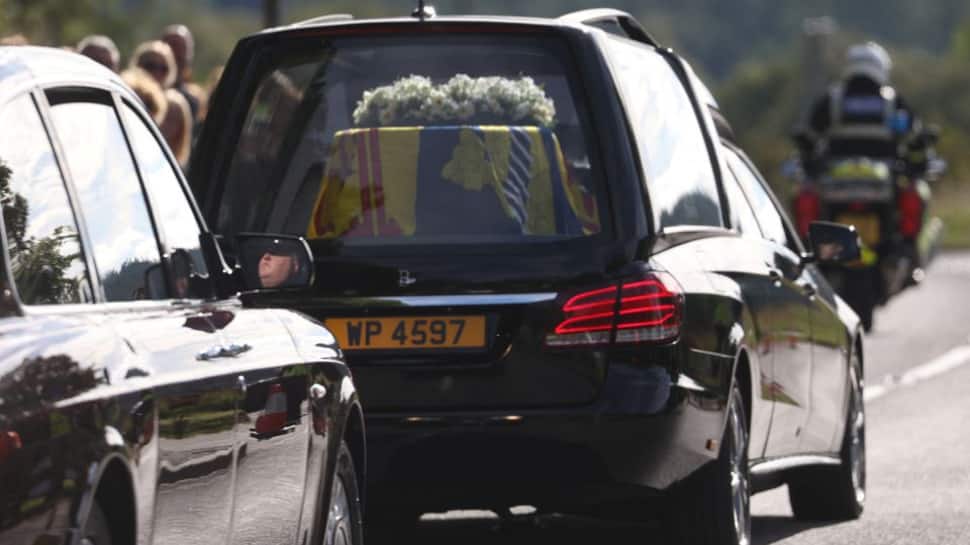 London: Thousands are lining the route to catch a glimpse as Queen Elizabeth II’s coffin, seen in public for the first time, began its journey on Sunday from Balmoral Castle in Aberdeenshire to the late monarch’s official Scottish residence of Holyroodhouse Palace in the capital city of Edinburgh.


At the end of a six-hour journey, the coffin “draped with the Royal Standard of Scotland and featuring a wreath of flowers on top” will rest in the Throne Room of Holyroodhouse until Monday afternoon for the royal household to pay their respects to Britain’s Queen. She died peacefully aged 96 at Balmoral on Thursday evening.


The seven-car cortege, with a police escort and the Queen’s daughter Princess Anne, slowly made its way towards Edinburgh, as crowds of people gathered to see it pass. Scottish First Minister Nicola Sturgeon has said the “poignant” journey would give people in Scotland the chance to come together to “mark our country’s shared loss”. She and other leaders in Scotland will observe the coffin as it makes its way past the Scottish Parliament in Edinburgh.


The oak coffin will make an onward journey to London later in the week after Buckingham Palace has unveiled plans for the State Funeral, which will take place at Westminster Abbey on Monday, September 19, declared a Bank Holiday in the UK. Prior to the funeral, the late monarch will lie-in-state at Westminster Hall within the Houses of Parliament complex for four days, to allow the British public to pay their respects.


On Saturday, members of the royal family viewed the several thousand floral tributes and messages left for the late Queen at her residences at Windsor, Balmoral and London. In a show of royal unity, Prince William and Kate “now the Prince and Princess of Wales” joined Prince Harry and his wife Meghan Markle for a walkabout at Windsor to speak to members of the public gathered at the gates of Windsor Castle.

A social media video clip shows Kate telling one group how her youngest son, Prince Louis, had said that his great grandmother was “now with great grandpa”, a reference to the Queen’s husband Prince Philip, who died last April aged 99.

It followed Charles, the former Prince of Wales, being formally proclaimed King in an ancient ceremony at St. James’s Palace during which he pledged to follow the “inspiring example” set by his late mother. Flags atop all palaces and government buildings in the UK were brought up to the full mast to mark the proclamation and will be lowered back to half-mast for the State Mourning on Sunday.

Buckingham Palace has released a schedule for the new monarch, King Charles III, who will host several audiences and travel to all parts of the United Kingdom as is customary during the State Mourning for a monarch. After a meeting with the Commonwealth Secretary-General, Baroness Patricia Scotland, at Buckingham Palace, the King will host Realm High Commissioners and their spouses in the Bow Room of the Palace on Sunday.


On Monday, Charles and Queen Consort Camilla will travel to Westminster Hall where both Houses of Parliament will meet to express their condolences at the demise of the Queen. The royal couple will then travel to Scotland for an audience with the Scottish First Minister, Nicola Sturgeon, and to attend the devolved Scottish Parliament. They are scheduled to travel to Northern Ireland on Tuesday and then later in the week to Wales.

On Monday, a procession will be formed on the forecourt of the Palace of Holyroodhouse to convey the Queen’s coffin to St. Giles’ Cathedral in Edinburgh, where King Charles III and members of the royal family will attend a service to receive the coffin. It will then lie at rest at St. Giles’ Cathedral, guarded by Vigils from the Royal Company of Archers, to allow the people of Scotland to pay their respects, Buckingham Palace has said.


The journey from Scotland to England will be undertaken by air on Tuesday, when the Queen’s daughter “Princess Anne” will accompany the coffin on its journey to the Bow Room at the monarch’s London residence of Buckingham Palace. A day later, on Wednesday, it will be borne in procession to the Palace of Westminster for lying-in-state until the day of the funeral. Members of the royal family, politicians and world leaders are expected to attend the State Funeral at 11 am local time on September 19.