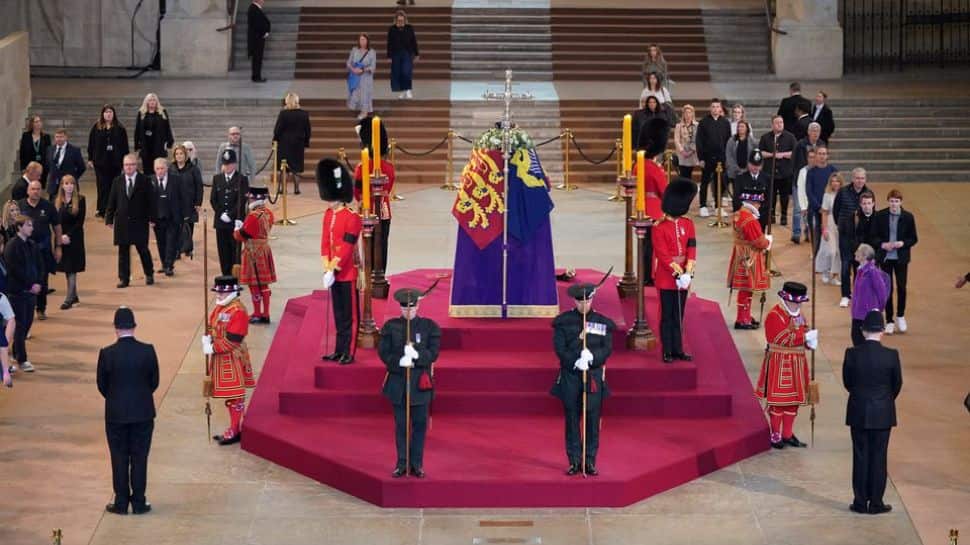 New Delhi: Britain’s longest-serving monarch, Queen Elizabeth II, who passed away on September 8 at the age of 96, will be honoured with a full state funeral at Westminster Abbey on Monday (September 19, 2022). The funeral will begin at 3.30 pm IST and is expected to last an hour. More than 2,000 guests will gather in London`s Westminster Abbey today for the funeral of Queen Elizabeth II.


Queen Elizabeth will be laid to rest with Prince Philip in St. George’s Chapel. Her parents were also buried in the tiny chapel on the grounds of Windsor Castle. King Charles and other Royals will attend the “deeply personal” event in the evening, away from the prying eyes of the general public.


Before the service commences at 11 a.m. (about 4 p.m. IST), a bell will toll for 96 consecutive minutes, marking the length of the Queen`s life, reports the BBC.

The Queen`s coffin will be taken in a ceremonial procession to Westminster Abbey for the state funeral service. According to local reports, the police have made extensive arrangements for crowd control and security measures as thousands of people are expected to line the route on Monday to say their final goodbyes to the Queen.


Around 200 pipers and drummers will accompany the coffin as it is carried on the gun carriage to Westminster Abbey by King Charles, his siblings, his sons Princes William and Harry, and other members of the Windsor family.


With the death of Queen Elizabeth II in the United Kingdom on September 8, King Charles III has been proclaimed the monarch. 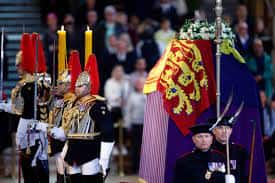 With world leaders and dignitaries gathered in the 13th Century church for the service, King Charles III and the Queen Consort will lead the procession behind the Queen`s coffin. The Prince and Princess of Wales will walk ahead of their nine-year-old son George and seven-year-old daughter Charlotte, followed by their uncle and aunt, the Duke and Duchess of Sussex, and other members of the Royal Family.


After the funeral ends, a committal service will follow in the evening at St George`s Chapel in Windsor, the BBC reported. The bells of Westminster Abbey will later be rung, but muffled, as is tradition following the funeral of a sovereign.


Some of the European royal families who will attend Monday`s funeral are Belgium`s King Philippe and Queen Mathilde; King Willem-Alexander of the Netherlands and his wife, Queen Maxima, along with his mother, former Dutch queen Princess Beatrix; and King Felipe and Queen Letizia of Spain.

Additionally, Emperor Naruhito and Empress Masako of Japan will also attend the service, as well as the King of Bhutan Jigme Khesar Namgyel Wangchuk.


Meanwhile, senior citizens and children are among those camping along the funeral routes, over 48 hours in some cases, to bid a final goodbye to Queen Elizabeth II on Monday. Some of those have come from as far as the UK countryside and have even brought with them beddings and tents to battle a reasonably cold breeze that flows through London this time of the year. Visitors are also carrying food and beverages for their extended stay on the streets. 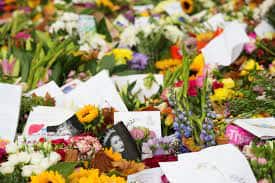