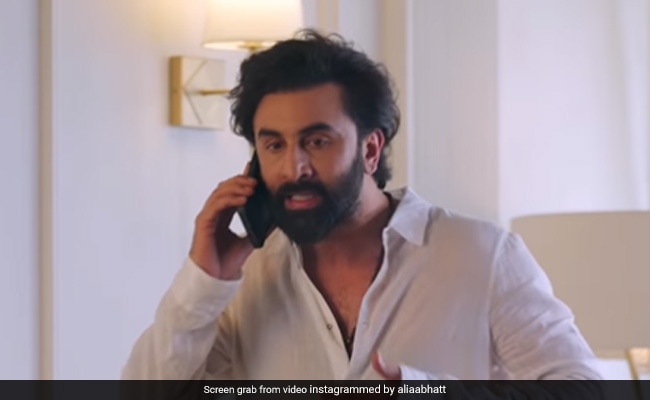 Ranbir Kapoor in a still from the video. (courtesy: aliaabhatt)

Hey, Ayan Mukerji, are you listening? Ranbir Kapoor and Alia Bhatt are in no mood to carry out more promotional activities forBrahmastra, which is set to release on Disney+Hotstar. They are “done with” it. Alia is tired of “singing Kesariya” at every event and Ranbir, on the other hand, has become “bhoot” because of all the “dance” performances. Moreover, the actor has other priorities right now – he is all set to welcome his first child with Alia. Confused what are we talking about? It’s Ranbir’s ROFL rant about Brahmastra promotion ahead of the film’s OTT release. Alia, on Wednesday, shared a clip of Ranbir fulminating against “more promotions” for Ayan’s directorial. Dressed in a white shirt and jeans, the actor is seen talking on the phone, “Nahi bhai, ho gaya. I am done with Brahmastra promotions, am done with Ayan Mukerji.”

Ranbir Kapoor is talking about unveiling the logo of Brahmastra with 150 drones at the 2019 Kumbh Mela in Prayagraj.

The announcement about Brahmastra, which was released in theatres on September 9, and having an OTT release on November 4 was made by Ayan Mukerji, earlier this week. “We have continued to work on the movie since its theatrical release to refine the movie technically for your phones, televisions and computers… added a few subtle things to the movie… and I am excited for Brahmastra to be in your homes soon so it can be experienced afresh in the most convenient manner,” read his post.

On Disney+Hotstar, Brahmastra will release November 4.