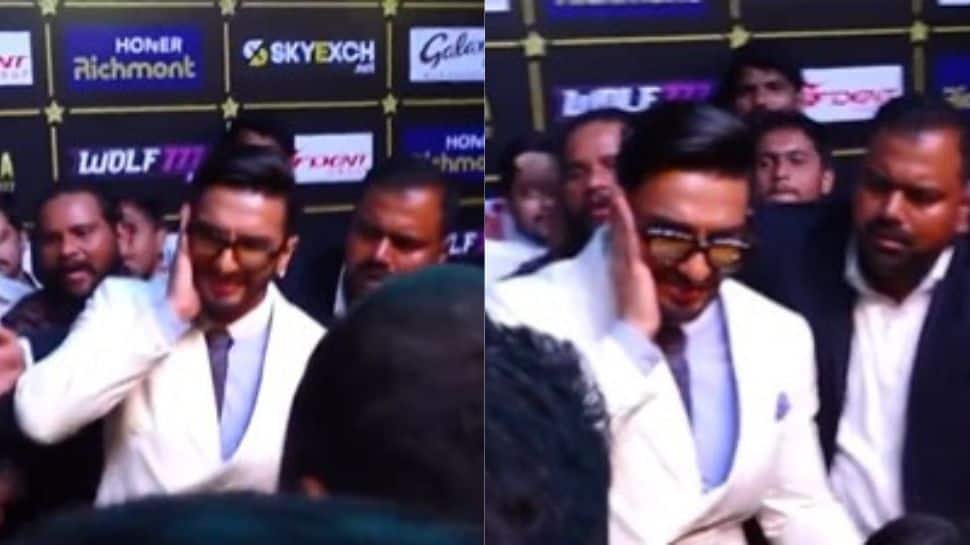 New Delhi: Ranveer Singh is one such actor who always manages to grab the limelight, no matter what! The actor recently went for the 10th edition of (South Indian International Movie Awards) SIIMA Awards which were held in Bengaluru. He also won the awards for ‘Most Loved Hindi Actor’ at the award show. However, a video of him is currently going viral on social media where it seems that he got slapped by his own bodyguard.

When Ranveer Singh arrived at the SIIMA Awards, he got mobbed by his die-hard fans who just wanted to meet their favourite actor. As the crowd came near him, his bodyguards intervened to protect him. So, while managing the crowd, one of the bodyguards accidentally slapped Ranveer Singh. In the video that went viral, Ranveer Singh was seen holding his cheek in shock after he got slapped. However, the actor did not say anything to the bodyguard and kept calm.


Check out the video-

Ranveer Singh had gone to Bengaluru for SIIMA Awards and was seen recreating Allu Arjun’s popular dialogue from ‘Pushpa’ “main jhukega nahi”. The event was attended by several film personalities from South India including Kamal Haasan, Rana Daggubati, Pooja Hegde, Vijay Deverakonda, Yash, and Allu Arjun. The actor also thanked the film fraternity in the South for bestowing him with ‘Most Loved Hindi Actor Award’. “Grateful to the South Indian Film Fraternity for this honour!  Thank you for bestowing me with such high esteem!” he captioned the post.


On the work front, Ranveer Singh was last seen in Yash Raj Films’ ‘Jayeshbhai Jordaar’. He will next be seen in Karan Johar directorial ‘Rocky aur Rani ki Prem Kahani’ opposite Alia Bhatt. Apart from this, he is also working on Rohit Shetty’s ‘Cirkus’.