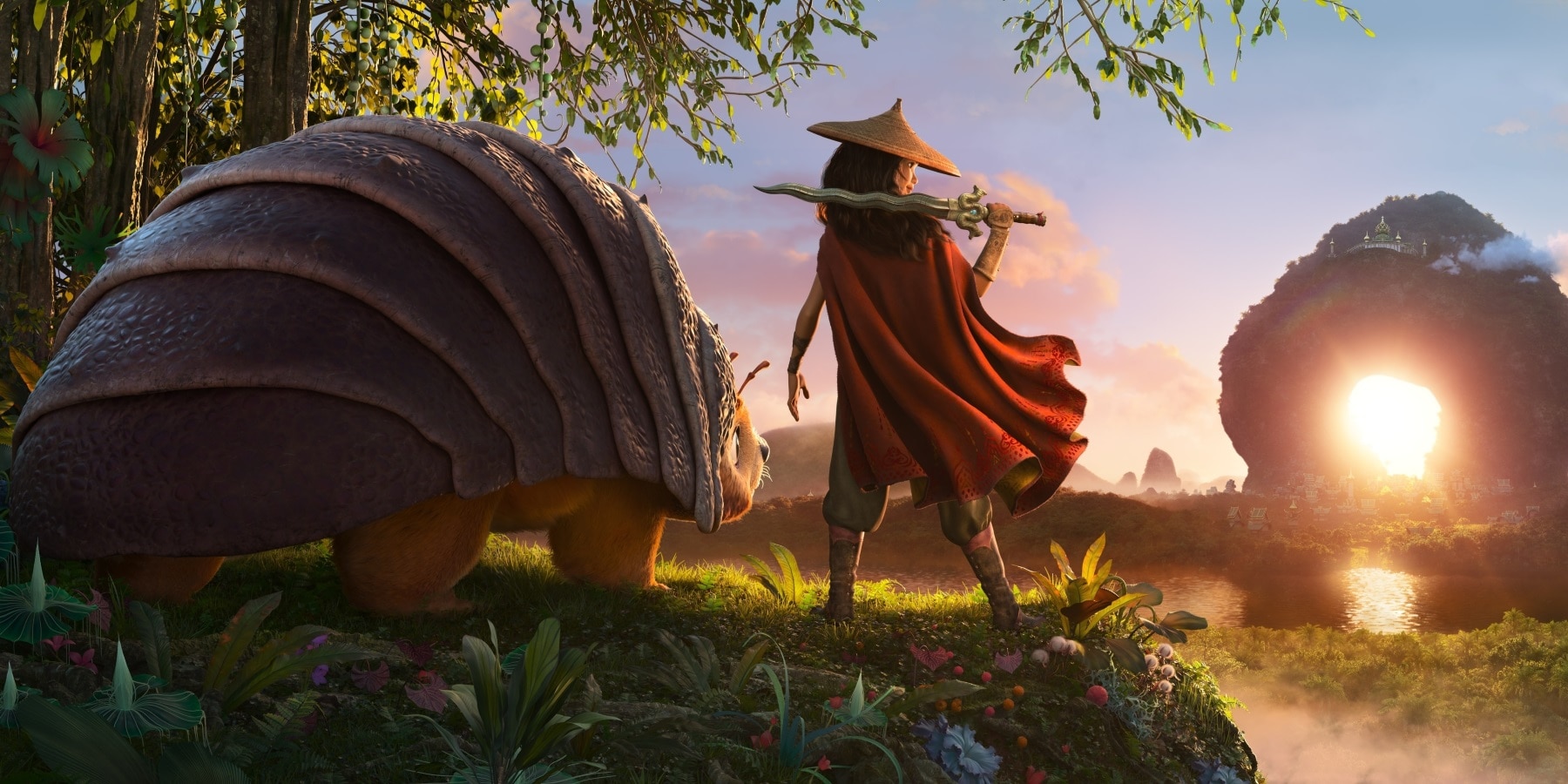 Raya and the Last Dragon is Disney Animation’s first original effort in over four years. That last one — before two sequels, 2019’s billion-dollar-plus Frozen II, and Ralph Breaks the Internet the year prior — was Moana, centred on a young girl from the Pacific Islands. Moana was Disney’s first “princess” from that region, and her appearance in Ralph Breaks the Internet’s memorable “Disney Princesses” scene reiterated that diversity, given she was one of a handful (next to Mulan, Jasmine, Pocahontas, and Tiana) who wasn’t a white character. With Raya and the Last Dragon, Disney continues down the Moana route. Raya, voiced by Kelly Marie Tran (Star Wars: The Last Jedi), is Disney’s first princess from Southeast Asia — and that ushers Disney into a world of new cultures.

For the most part, that works wonderfully. Raya and the Last Dragon directors Don Hall (Big Hero 6 and Moana co-director) and Carlos López Estrada (Blindspotting) borrow and blend visual elements from several Southeast Asian cultures, creating a world that’s beautifully realised, feels lived in, and features some gorgeous landscapes. And there are some nice cultural touches, be it a soup bowl made up of ingredients found across Southeast Asia (that also acts as a metaphor) or something as small as people taking off their footwear before they step into a hallowed place. It’s also vast in scope, with the fantastical world of Raya and the Last Dragon made up of kingdoms that look different from each other — and represent the sheer diversity that can be found in the region. Its cast is also largely of Asian descent, who have Vietnamese, Chinese, Korean, and Hong Kongese heritage.

And because of the confluence of cultures, Raya and the Last Dragon’s art and music (by composer James Newton Howard) feel like they carry a South Asian feel to them as well. It’s too bad then that Disney isn’t bringing the film to streaming in India. Raya and the Last Dragon really ought to have been dubbed into Hindi, Tamil, and Telugu and released simultaneously on Disney+ Hotstar, given the pandemic. As it stands, it’s available in cinemas only in India, even as it’s out on Disney+ Premier Access in select markets.

From Godzilla vs. Kong to Snyder’s Justice League, What to Watch in March

For those who can watch it, they will find an entertaining romp infused with some important messaging. On a structural level the new Disney movie feels like a heist film. And from a plot standpoint it comes across as a video game at times. As for the narrative, Raya and the Last Dragon writers Qui Nguyen and Adele Lim (Crazy Rich Asians) — who developed a script based on a story that had eight contributors — touch upon values of trust, forgiveness, and unity during the film’s 95-minute runtime. One of them is repeated one too many times though, that too through dialogue, almost as if the writers don’t trust their (largely) young audience to follow along. That’s a shame because it’s quite trustworthy of them elsewhere.

The messaging is handled better when it comes to that titular dragon Sisu (Awkwafina), through whom it dismantles that the archetype big-hero trope, that it takes the best of them all to stop the greatest threats. Early into Raya and the Last Dragon, Sisu reveals that she’s “not, like, the best dragon”. But what mattered in a pivotal moment, as she adds deep into the film, is that she trusted the people around her, and they trusted her. Of course, the Disney movie’s real magic is Awkwafina herself. She proves to be an (obvious) genius bit of casting, bringing more to a voice-only role than I’ve noticed in years. It’s not that she’s supplied with terrific lines, but rather it’s the delivery choices she opts for that make her unusual dragon character such a delight to witness.

Raya and the Last Dragon opens with a spritzy introduction to the world of Kumandra — its map looks like a dragon-shaped river is cutting through it — a vast, serene and wonderful kingdom filled with humans and dragons. But after a mindless plague known as the Drunn swept through the land and turned everyone into stone, the dragons made a desperate last stand to wipe their scourge with the help of a Dragon Gem (a MacGuffin, naturally). It worked, and the humans came back, but the dragons didn’t — save for Sisu who hasn’t been seen since. Scared for the future, people turned on each other, fighting over the Dragon Gem, and dividing Kumandra into five parts named for the dragon shape they live next to: Fang, Heart, Spine, Talon, and Tail.

The Falcon and the Winter Soldier, Teddy, and More on Disney+ Hotstar in March

Five hundred years have passed, and those discords have sown deeper than ever, but Raya’s father Chief Benja (Daniel Dae Kim) of Heart — the keeper of the Dragon Gem, and everyone’s envy — believes they can be reunited into Kumandra again. To that end, he’s invited people from all the other regions. But the five factions turn on each other (expectedly), and fight over the Dragon Gem, which breaks into five pieces. The protection spell is seemingly broken as the Drunn return, turning everyone into stone again. Raya escapes, and sets out on a six-year journey to find Sisu, the last dragon, with the help of her trusted steed Tuk Tuk (Alan Tudyk) — a mix between an armadillo and a pill bug, but massive — who, as you can tell, is named after the rickshaw, or tuk-tuk as it’s called in parts of Southeast Asia.

That’s a lot of exposition. The Raya and the Last Dragon directors do their best to be clever about it, deploying touches of self-awareness or trying to present it organically, but it is what it is. As for the premise, you can draw some obvious comparisons, including two of the biggest films of all time in Avengers: Infinity War and Avengers: Endgame (from Disney’s sister studio Marvel). In both Avengers and Raya and the Last Dragon, monsters have “killed” many but they can be brought back, if the heroes can collect a bunch of gem pieces. There are parallels to Avatar: The Last Airbender too, while the visuals pay homage to everything from Mad Max: Fury Road, Indiana Jones, and Frozen.

These varying landscapes are presented in a stylish and epic fashion, featuring a hostile desert, giant sun-baked palace, a desolate icy tundra, and a night market that hints at a darker underbelly — all of which bring to mind different parts of Southeast Asia. The world of Raya and the Last Dragon seems ripe to become a franchise (thanks to the different worlds), more so given how it proceeds.

As Raya traverses the five lands of Kumandra, she comes across a motley of zany characters that end up joining her cause one way or another, assembling an accidental fellowship of sorts. There’s the boy wonder chef and ship captain Boun (newcomer Isaac Wang), warrior giant with a heart of gold Tong (Benedict Wong, from Doctor Strange), and baby con artist Noi (Thalia Tran, from 2019’s Little) and her three monkey friends that are a real handful. And of course, there’s the water dragon Sisu, who turns out to be a wacky teenager herself, more prone to cracking jokes than doing dragon-y things. Raya and the Last Dragon knows that its ensemble doesn’t make much sense, but it fully owns it, leading to plenty of laughs in the process. But crucially, all their lives have been deeply impacted by the Druun. 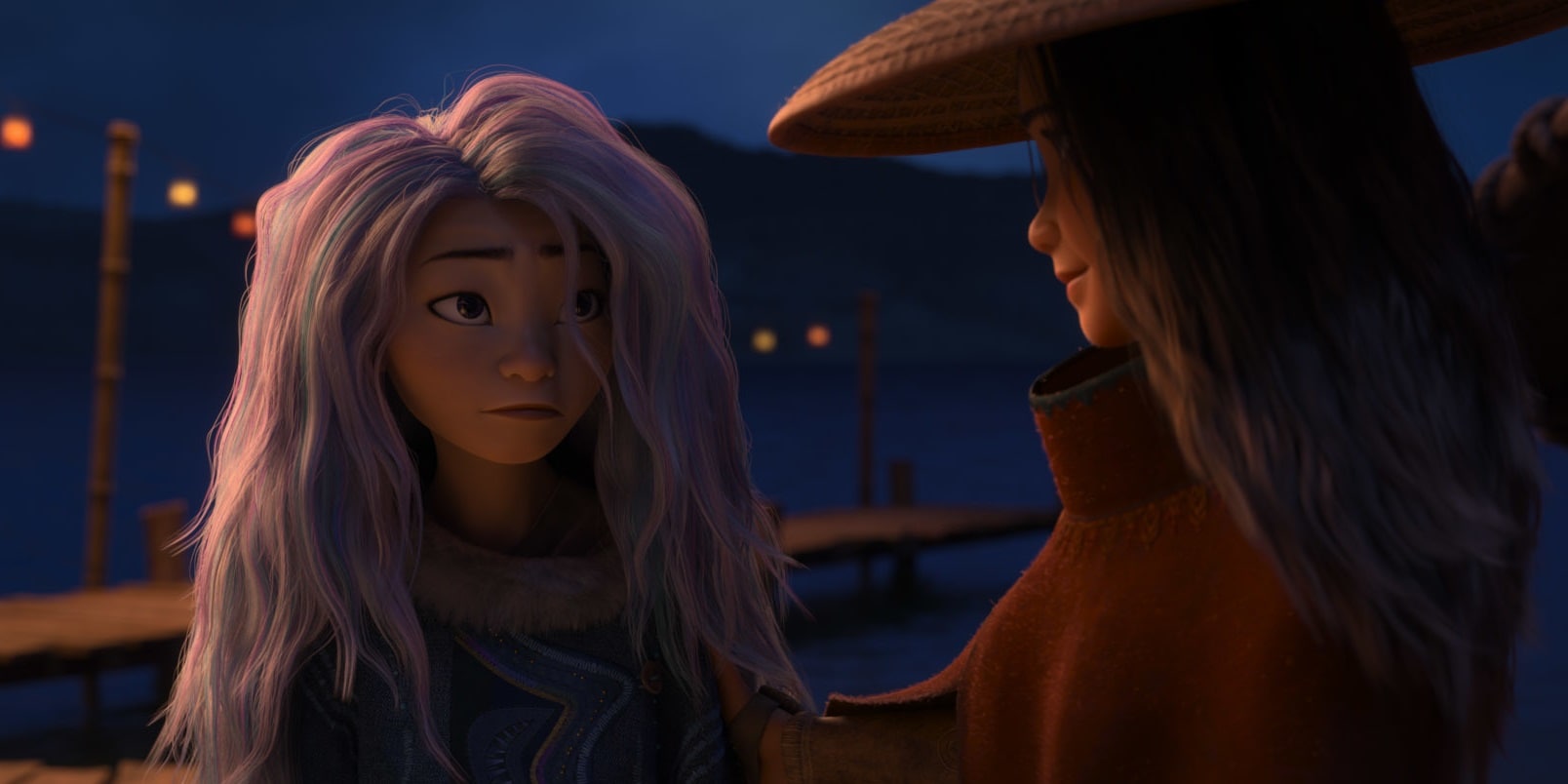 That also includes Raya’s former frenemy Namaari (Gemma Chan, from Captain Marvel) of Fang. Like Raya, she too is after the Dragon Gem pieces — and the closest Raya and the Last Dragon has to an antagonist, what with the Druun being a faceless purple-and-black-coloured smoke cloud.

But the real villain in the new Disney movie are the humans themselves. Or rather, their fears, doubts, and weaknesses. As Sisu states in a dialogue, the Drunn are after all a plague born of human discord. Raya’s father preaches the important of unity, which is ever timelier in a world where isolationism is the new normal, where people make little effort to understand each other, and nearly every country seems to be practising an “us first” policy. The film communicates that sometimes, it’s up to the next generation to fix the world. That’s a resonant message given how young activists today are viciously attacked, jailed, or even killed globally. And to heal wounds and to bridge those insular chasms, at times, you must take the first step — and trust that others will follow.

Raya and the Last Dragon is out March 5 in cinemas worldwide. It’s also available on Disney+ with Premier Access in select markets.