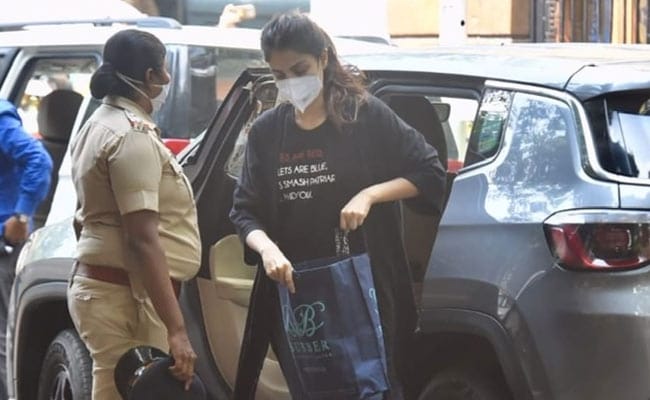 Rhea Chakraborty is being questioned in connection with allegations of drugs.

Rhea Chakraborty arrived for questioning at the Narcotics Control Bureau (NCB) office in Mumbai for the third straight day this morning in the investigations into the Sushant Singh Rajput case. This time, her images went viral on social media for a different reason.

Rhea Chakraborty was seen in a black tee with a message: “Roses are red, violets are blue, let’s smash the patriarchy, me and you.”

Rhea Chakraborty is being questioned in connection with allegations of drugs in the Sushant Singh Rajput case. Her brother Showik Chakraborty was arrested by the Narcotics Control Bureau last week.

Rhea Chakraborty and her family have faced multiple investigations and questioning since the death on June 14 of Bollywood star Sushant Singh Rajput, whom she dated in his last few months.

On Sunday, she was mobbed by the media when she arrived for questioning, which caused an outcry on social media over her hounding.

Public opinion has been sharply divided on Rhea, also an actor, who has been the target of fan campaigns on social media.

Accused by Sushant Singh Rajput’s family of exploiting him for money, mentally harassing him and driving him to his death, Rhea Chakraborty has hit back with a complaint against the actor’s sisters.

Based on her complaint that Sushant Singh Rajput’s sister forged a prescription to help him access anxiety medicine illegally, Mumbai police registered a case of abetment to suicide.