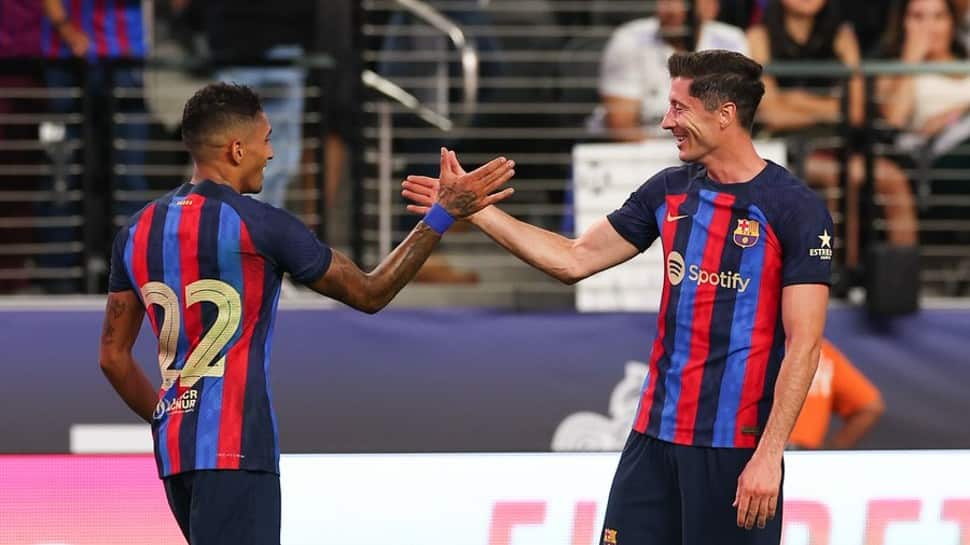 FC Barcelona’s new signing Raphinha scored a stunner for the Catalans against Real Madrid in Sunday’s (July 22) El Clasico at the Allegiant Stadium, Las Vegas. The Brazilian winger needed just 26 minutes to get Barca the lead which resulted in their win of the Clasico in USA. Notably, the goal against Madrid was Raphinha’s second strike for the Spanish giants, making it two goals for the summer signing in two matches played for his new club.


With both sides playing a warm-up game for the upcoming 2022-23 season, Raphinha’s strike proved to be decisive as FC Barcelona won the match against Real Madrid 1-0. (WATCH: El Clasico FIGHT between Antonio Rudiger, Sergio Busquets and more)


It was an error from Madrid’s Eder Militao when his team were trying to play out from the back as Barca were pressing high. Raphinha took the oppurtunity from outside the box with his left foot putting up a thunderous strike against the La Liga champions. (Meet ‘world’s most beautiful footballer,’ Ana Maria Markovic – In Pics)


Checkout the stunner from Raphinha in the El Clasico below…

Good news for Real Madrid is that goalkeeper Thibaut Courtois was in fine form during the clash as he saved numerous strikes coming his way from the Barcelona side as new signings like Robert Lewandowksi and co. were in desperate mood to make a mark on their debut. The former Bayern Munich forward led the attacking line for Xavi’s men donning the No. 12 for his new club.

Xavi was all praise for his new players as he said, “You have already seen Raphinha show that he is capable of making a difference, very dynamic, he can play on both wings. And Robert is a world star. A world star who comes with tremendous humility, who comes to help us and who has adapted very quickly.”


“The truth is, I am very happy with these two incorporations that at the same time give a lot of competition to the people at the top and thus we will all have to work even harder,” he added. (Erling Haaland to Aurelien Tchouameni: 5 most expensive signings in Transfer Window 2022 so far – In Pics)

Even though the match didn’t pan out as Real Madrid would have wanted to, coach Carlo Ancelotti was happy with his team’s performance. Star striker Karim Benzema was missing from action from the Clasico and as a result, Madrid failed to create lethal chances infront of goal.


The only lethal strike was from Madrid came through midfielder Fede Valverde, when he lashed onto a volley but the crossbar denied him. Barca’s high pressing resulted in many oppurtunities for them to increase their one goal lead but second-half subsitutes Memphis Depay and Ousmane Dembele were denied by the heriocs of goalkeeper Courtois and Madrid defenders.