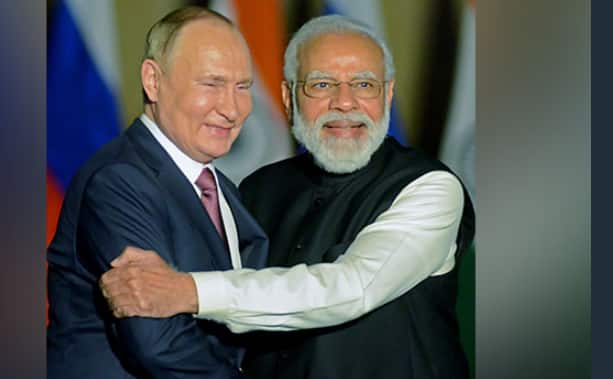 New Delhi: Ahead of External Affairs Minister S Jaishankar`s visit to Moscow this week, several diplomats and foreign-policy experts are keeping a close eye on India`s possible role in pressing for peace between Russia and Ukraine. As per the New York Times, officials within the Indian government have already been discussing what role India might play in peacemaking efforts when the time is right. The main issue pertaining to the matter is the unwillingness to talk between Russia and Ukraine. While Ukraine is feeling it has momentum on the battlefield. On the other hand, Russia too seems in no mood to talk. However, experts believe that if owing to the war, the rising energy prices make life really miserable in Ukraine, a settlement or a ceasefire may be possibly reached, NYT reported.


Earlier this year, French President Emmanuel Macron brought up the idea of holding peace talks along with Prime Minister Narendra Modi, NYT reported citing two Indian officials. Although the idea didn`t materialise, India is increasingly viewed as a potential peacemaker with access to both sides. “Were Russia and Ukraine to express interest in having a neutral third party mediate, India would be a strong candidate with credibility on both sides,” NYT quoted Jeff M Smith as saying, who is the director of the Asian Studies Center at The Heritage Foundation, a Washington research institute.


PM Modi enjoys a good rapport with President Putin, reported NYT saying that he can speak to Russia directly. However, India continuing to buy Russian oil and refusing to support resolutions against Russia has angered Ukraine and US. But, India has believed that calling out Russia would achieve little while staying neutral, at least in public could come in handy in efforts to end the war, reported NYT.


Earlier in September, during a regional summit in Uzbekistan, PM Modi said the whole world was paying the price and told Putin, “Today`s era is not of war.” He said he wanted “to discuss how we can move forward on the path of peace,” reported NYT, calling PM Modi “India`s most powerful prime minister in decades.” It said that he is trying to refashion India`s tradition of nonalignment into a more commanding strategy “all alignment” of sorts. Also, trying to solve the world`s biggest crisis seems to appeal to PM Modi`s ambition to go down as one of India`s greatest leaders in history.


If the peacemaking efforts succeed, it can bring a more prominent place for India in the global order and bring it closer to the long-sought prize, a permanent seat on the United Nations Security Council, NYT reported.

External Affairs Minister S Jaishankar, at a conference last month in New Zealand, asked, “How do you get to facilitate at least the ability for the participants in the conflict to sit down and talk? Whatever we can do, we will be willing to do.”Another possibility floated by the diplomats is a joint mediation effort led by India, Israel and the United Arab Emirates (UAE).”


The fact that these issues are being discussed and that some officials are contemplating an India, Israel, UAE mediation effort is a significant development,” NYT quoted Former Ambassador to India Kenneth Juster as saying. “That these three countries could be working together and possibly approaching Russia to mediate its dispute with Ukraine, illustrates the fluidity of the international system and the changes that have occurred in it,” he said.


Kenneth Juster further said that the Indian foreign service has “very skilful diplomats,” and that if they offered to help with talks when Russia and Ukraine were ready for them, “that would be good”.


Jaishankar will begin his two-day visit to Russia on Monday. He will be holding talks with the country`s Foreign Minister Sergey Lavrov, in continuation of the regular high-level dialogue between the two sides. Talks between the two sides are expected to cover the entire range of bilateral issues and exchange views on various regional and international developments.

Jaishankar is scheduled to meet Deputy Prime Minister of the Russian Federation and Minister of Trade and Industry, Denis Manturov, his counterpart for the India-Russia Inter-Governmental Commission on Trade, Economic, Scientific, Technological and Cultural Cooperation (IRIGC-TEC).” Issues pertaining to bilateral economic cooperation in various domains will be discussed,” the Ministry of External Affairs (MEA) release said in an earlier release.


Jaishankar`s visit follows Russian President Vladimir Putin`s praise of Indians. Marking the occasion of Russia`s Unity Day on November 4, Putin said India has much potential with no doubts that it will achieve outstanding results in terms of development. “India will achieve outstanding results in terms of its development – there are no doubts – and almost one-and-a-half billion people: now that`s potential,” the Russian President said, according to a Reuters translation of the speech originally delivered in Russian.