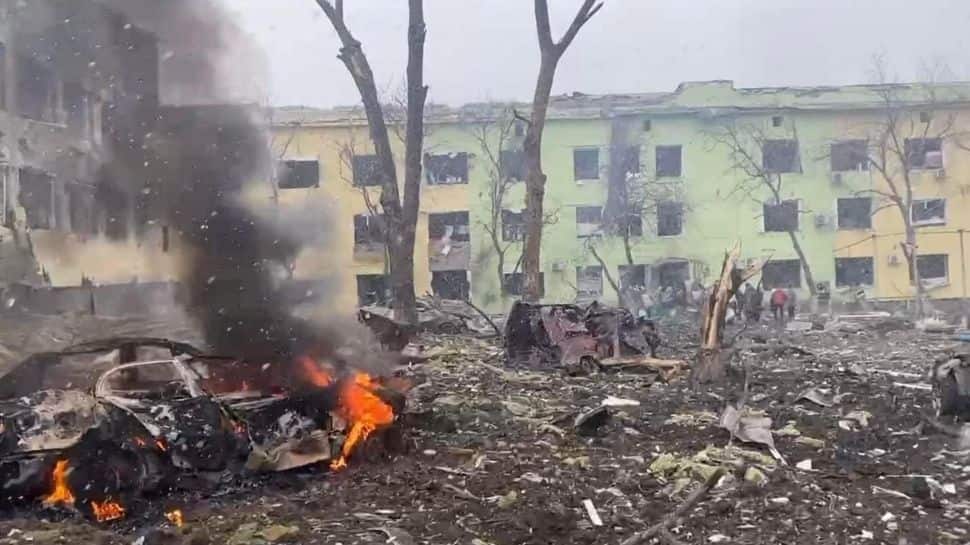 Burials in mass graves, death of a dehydrated child, alleged damage after a Russian strike on a maternity hospital – disturbing news kept emerging from the city of Mariupol. Talks between Ukraine and Russia’s foreign ministers made little apparent progress as the Russia-Ukraine war stretches to its third week. On Thursday (March 10), hundreds of thousands of civilians remained trapped in different cities of Ukraine. Officials in Mariupol said Russian warplanes again bombed the encircled southern port city where a maternity hospital was reportedly pulverised on Wednesday.

Efforts to send food, water and medicine into the city of Mariupol failed when Russian tanks attacked a humanitarian corridor, President Zelenskyy said. Reports have been emerging about mass graves where scores of dead are being reportedly buried unceremoniously. Many reports have said that the morgues are overflowing and in the face of continuous attacks, city officials decided that waiting around isn’t an option, and therefore scores are being buried in mass graves. To make matters worse, there’s a severe shortage of water and gas. Shocking news reports also came of a six-year-old girl dying of dehydration, as she was exhausted and alone, with her mother killed in the bombing.  “We cannot say how long our little, strong Mariupol citizen has been fighting for her life. We cannot imagine how much suffering an innocent child had to endure,” Mayor Vadym Boichenko said in an online post, sharing only the girl’s first name: Tanya, reported Reuters. The death of the child is yet to verified.

Mariupol is the site of an intense battle. Ukrainian President Volodymyr Zelenskyy said three people including a child had been killed in the bombing on Wednesday. The attack also left more than dozen injured, reports stated. This news sparked criticism worldwide. After an international condemnation of a Russian strike on a hospital in Mariupol and Moscow’s claims the building no longer served as a healthcare facility, the Kremlin said it would investigate further. The defence ministry later denied hitting the hospital. But Ukraine President Zelenskyy rejected Russian assertions there had been no patients there. “Like always, they lie confidently,” said Zelenskyy, who has accused Moscow of waging genocide in the war it launched two weeks ago.

Like in many countries, Canadian media had condemned the alleged hospital attack. The Russian Embassy in Ottawa, Canada said, “Russia unequivocally rejects (the) Canadian government’s groundless accusations of having allegedly attacked a maternity hospital in Mariupol. Video and photo footage attempting to present a damaged hospital building as a result of a ‘Russian airstrike’ is nothing but a blatant lie. It is yet another outrageous provocation by the Kyiv regime. A climax of the fake news dissemination campaign,” the Russian Embassy said in a statement on Thursday.

The Russian Embassy condemned the story saying it was staged and noted that Canadian media has not made any attempt to independently verify the veracity of Kyiv’s claims. The Russian Defense Ministry has kept insisting the operation was solely targeting Ukrainian military infrastructure and has emphasized the civilian population is not in danger.