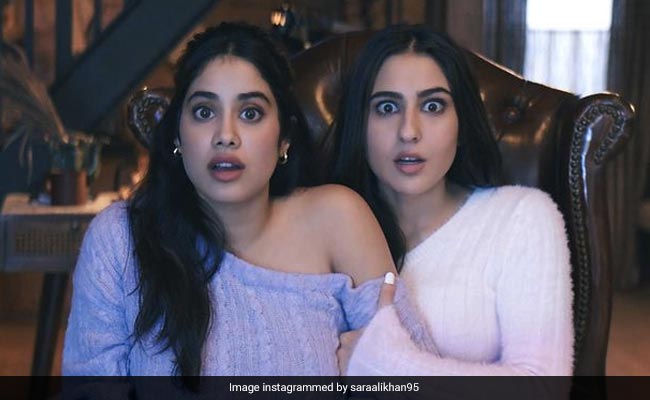 Actors Janhvi Kapoor and Sara Ali Khan, who recently shared the coffee couch on Koffee With Karan season 7 are likely to collaborate for an exciting project. On Friday, actor Sara Ali Khan shared a picture of her with Janhvi Kapoor and hinted a new project. She wrote, “From brewing koffee that was hot, now finally as ko-actors we shot. Wait and watch us- tell us what you thought. In the picture, we can see the two actors sitting together in casual outfits and looking terrified. This news has brought lots of excitement among their fans. Actor Janhvi Kapoor also dropped a comment that read, “It’ going to be a blast.”
Take a look at the actor’s post:

While Sara shared a terrified picture of them, Janhvi Kapoor shared a slightly different picture, where they were both seen smiling at the camera. Her caption read, “Travel adventures ✔️ koffee dates ✔️ and now co-stars!”

Apart from work, the two actors also share a special bond and their Instagram pictures are proof.
A few weeks ago, Sara shared a few pictures of her with Janhvi from the sets of Koffee With Karan Season 7.
Check the actor’s post:

The two actors have also been on several trips together in the past including Kedarnath, LA and Goa. The two often share pictures with each other, giving the best of friendship goals to many of their fans.
On the work front, Sara Ali Khan was lastly seen in Anand L Rai’s film Atrangi Re. The actor will next be seen in Laxman Utekar’s untitled film, also starring Vicky Kaushal.
Whereas, actor Janhvi Kapoor recently completed shoot for her upcoming film Bawaal and her film Good Luck Jerry recently released on Disney Plus Hotstar