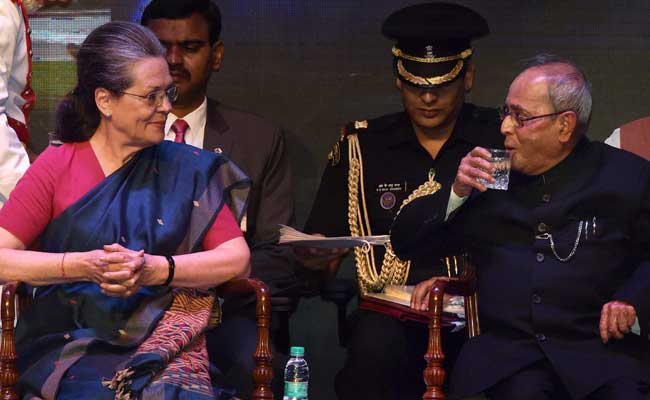 Congress chief Sonia Gandhi wrote to Pranab Mukherjee’s daughter Sharmistha Mukherjee on Monday night to offer condolences and express sorrow over the death of her father earlier in the day.

Mrs Gandhi told Ms Mukherjee she had many warm memories of working with her father, and said that the Congress party deeply mourned his loss and would always honour his memory.

In her brief but heartfelt letter Mrs Gandhi said Pranabda – as the former President of India was respectfully called by his admirers – had been an “integral and prominent part of national life, the Congress and the central government” over the course of his five decades in politics.

“It is hard to imagine how we can do without his wisdom, experience, advice and deep understanding of so many subjects. He brought distinction to every post, established a genuine rapport with colleagues across the political spectrum and served our country with the utmost dedication,” she said.

“His life over the past 50 years mirrored 50 years of the history of India, for he played a crucial role in both shaping the course of events as well as actively participating in them, whether as a cabinet minister, parliamentarian or President of India,” Mrs Gandhi wrote.

A veteran statesman, author and intellectual, Mr Mukherjee served as President of India from 2012 to 2017 – working with both former Prime Minister Manmohan Singh and Prime Minister Narendra Modi.

Hailed by many as “the Best Prime Minister India never had“, he was awarded the Bharat Ratna – India’s highest civilian award – last year. His death has been met with an outpouring of grief across party lines, with Prime Minister Narendra Modi leading the tributes.

Praising him as a “scholar par excellence (and) a towering statesman“, PM Modi said Mr Mukherjee’s loss would be felt deeply by the nation and remembered him for the guidance and support he had offered in his first term.

Congress MP Rahul Gandhi said he joined the country in paying homage to Mr Mukherjee, and his party described him as “one of (its) tallest leaders”.

Pranab Mukherjee, 84, died at Delhi’s Army Hospital Research & Referral, where he was admitted on August 10 and underwent brain surgery, following which he developed complications – lung infection and renal dysfunction.

Mr Mukherjee had also tested positive for the novel coronavirus when he was admitted to hospital.