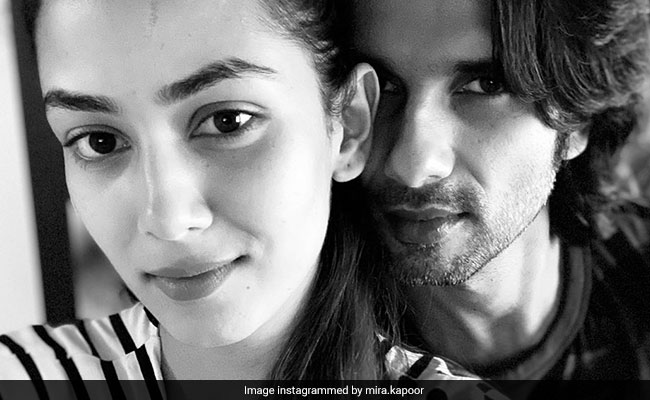 Mira Rajput, who never forgets to treat her Instafam, had just the right picture to quench the craving of her and her husband Shahid Kapoor’s fans. On Thursday, Mira Rajput shared a stunning picture of herself with Shahid Kapoor and described it in just two words “yin and yang.” It is easy to see why though. In the greyscale picture, Mira can be seen dressed in white dress with stripes and polka dots, while Shahid Kapoor complements her in a black t-shirt. PS_ We love their expressions in the picture. So did the fans of the couple. An Instagram user wrote:”Favourite couple.” Another fan added, “made for each other.” Heart emoticons in the comments section kept popping up.

Check out this picture of Mira Rajput and Shahid Kapoor:

Meanwhile, Shahid Kapoor shared a selfie of himself on his Instagram profile and he captioned it: “Feeling it.”

We simply love it when Shahid and Mira appear on each other’s Instagram profiles. Which reminds us of a super cute post that Mira shared earlier this month, which featured her husband but was exclusively about her love for her favourite eatery and the caption on her post read, “Dear Yauatcha, I miss you. I know we had to break up all of a sudden, but the lack of your warm fluffy dimsums isn’t doing me any good. I tried, but it seems like life is better with you. Let’s get back together? #longdistancerelationship. I promise Shahid Kapoor won’t mind.”

Mira Rajput and Shahid Kapoor got married in 2015 and are parents to a son named Zain and a daughter Misha. Shahid Kapoor is a star of films like Udta Punjab, Haider, Jab We Met, “Padmaavat” and Ishq Vishk. His last film was the 2019 hit Kabir Singh. The actor will next be seen in Jersey.