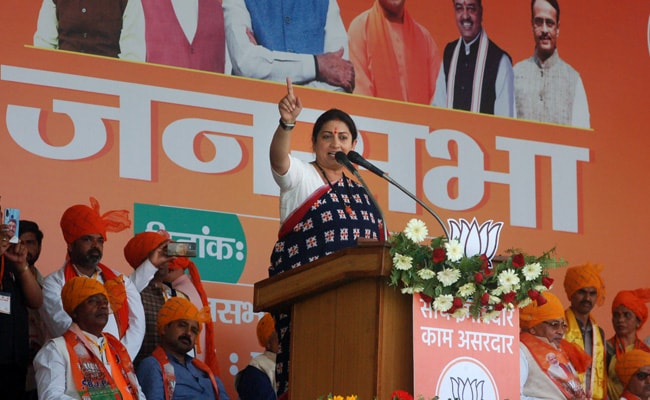 “I don’t think he has the strength to learn from his mistakes… In UP it was said that Priyanka will breathe new life into the party, instead, she blew it up,” she told news agency ANI in response to a question.

With the Congress scoring an unambiguous 0/5 in the state elections from Uttar Pradesh to Goa, and losing one of the few states it held in Punjab, Rahul Gandhi’s latest mea culpa had said the party will learn from these election results.

“Humbly accept the people’s verdict. Best wishes to those who have won the mandate. My gratitude to all Congress workers and volunteers for their hard work and dedication. We will learn from this and keep working for the interests of the people of India,” he wrote on Twitter.

His sister Priyanka Gandhi Vadra, tasked four years ago to build up the party in Uttar Pradesh for this assembly election, said the party had been unable to “convert our hard work into votes”.

“The vote of the people is paramount in a democracy. Our workers and leaders worked hard, formed the organization, fought on the issues of the people. But, we were not able to convert our hard work into votes,” she said in a series of tweets.

In a second, she said the Congress is following a “positive agenda for the betterment of UP and the public” and will “continue to fulfil the duty of a battle-ready opposition with full responsibility”.

The Congress lost Punjab to the Aam Aadmi Party (AAP) and was defeated in the three states where it had hoped for a comeback or at least, a fighting chance – Goa, Uttarakhand and Manipur. In Uttar Pradesh, it appeared to be headed for a score worse than 2017 with just two seats out of 403.

Addressing a press conference at the party’s headquarters in Delhi, Congress General Secretary and chief spokesperson Randeep Surjewala said even though the Congress was successful in reviving the party, “we could not convert public opinion into seats”.

The Congress party has been successful in reaching every street and locality of Uttar Pradesh, he claimed.